Posted on December 24, 2016 by Simon Richardson 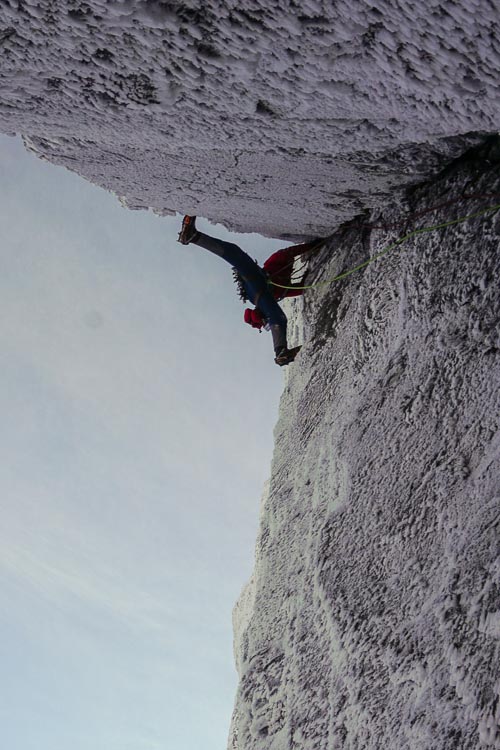 Uisdean Hawthorn leading the steep corner-chimney on the second pitch of Avenging Angel Direct (VIII,8) on Ben Nevis during the November cold snap. This very steep route is steadily acquiring the reputation as one of the finest mixed climbs on the mountain. (Photo Adam Russell)

By any measure it’s been a slow start to the season. During the cold snap in November many climbers enjoyed good climbing on the well known early season venues in the Cairngorms and Ben Nevis, but a major thaw followed by a sustained high pressure kept winter climbing at bay until the current series of storms on the run up to Christmas.

Together with the first ascents already reported on scottishwinter.com a handful of new routes have been added to the Southern Highlands, Lochnagar, the Loch Avon Basin, Creagan Cha-no and A’Chralaig in the North-West. For the most part these have been in the mid grades, and little high standard activity has taken place.

One of the most difficult routes climbed so far this season was the fourth complete ascent of Avenging Angel Direct (VIII,8) on Creag Coire na Ciste on Ben Nevis by Adam Russell and Uisdean Hawthorn on November 23. This route was first climbed in its entirety by Jim Higgins and Neil Adams in February 2013 followed by Erick Bailot and Pete Macpherson on Novenber 24 2013. It was repeated with a Direct Start by Iain Small and Tony Stone the following winter. “We thought maybe four stars, certainly three,” Uisdean told me. “It’s the best route I have done up in the Number Three Gully area apart from Han Solo – but I think that is for more personal reasons!”