Posted on December 13, 2013 by Simon Richardson 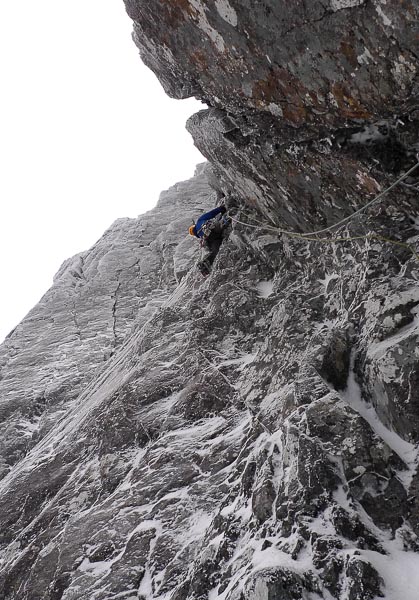 Iain Small leading the new Alternative Start to Avenging Angel on Ben Nevis. This perplexing area of overhanging grooves at the left end of Creag Coire na Ciste has yielded a number of excellent routes and variations in recent seasons. (Photo Tony Stone)

Although this year’s December weather is proving to be unusually mild, there was a brief burst of cold air at the end of last week which produced a flurry of activity on Ben Nevis. Three notable ascents took place on December 6 – an early repeat of The Knuckleduster (VIII,9) on Number Three Gully Buttress by the powerhouse team of Martin Moran and Pete Macpherson, a possible second ascent of The Sorcerer (VII,8) on Creag Coire na Ciste by Keith Ball, Kenny Grant and Guy Stephen, and a new start to Avenging Angel Direct.

The Sorcerer takes an unlikely line through the steep wall below the exit gully of Lost the Place, and to the best of my knowledge, it had not been repeated. Steve Ashworth and Nils Nielsen from Norway made the first ascent during a memorable day on the 2007 International Winter Meet. They climbed Darth Vader (VII,8) in the morning, followed by The Sorcerer, before racing up Thompson’s Route to warm down!

The third important event was the addition of a new Alternative Start to Avenging Angel Direct (VIII,8) on Creag Coire na Ciste by Iain Small and Tony Stone. The sustained Tech 7+ pitch follows a parallel corner line to the left of Angels with Dirty Faces (VIII,8) – a Small-Stone addition from February 2011.

“Friday turned out a nice day,” Iain explained. “There was no wind which was a relief as it was pretty cold. We headed up to the Ben for a look, and as usual, it delivered. Unfortunately the keener (and earlier) team of Moran and Macpherson were already on Knuckleduster so we headed over to the Archangel area. After the recent interest in Avenging Angel Direct, it reignited my regrets over not continuing up that finish when we climbed Angels with Dirty Faces. So this time we started up a different lower pitch between Archangel and Angels with Dirty Faces to reach the top two pitches of Avenging Angel. It was satisfying to finish up that route eventually!

Reading your recent post, and the opinions generated, regarding the recording of lower grade routes, it left me wondering how to treat our alternative (but less direct) than the Direct Start to AA! It was a fun pitch, but perhaps left until someone can incorporate it into a line cutting through the headwall? On balance though, I feel it should it be recorded as an alternative start – I guess the same agreements and principles apply to routes at all grades in the end.”