Posted on November 29, 2013 by Simon Richardson 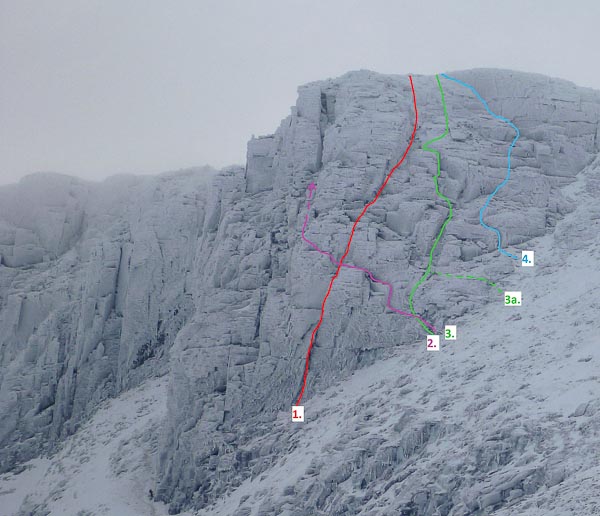 Simon Yearsley had an enjoyable day in the Northern Corries on November 25, coming away with a possible first ascent on No.4 Buttress in Coire an Lochain. His climb raises some interesting aspects about the recording of new routes.

“I was due to climb with Helen Rennard again on Monday,” Simon explains, “but she was pretty tired after two days on the Ben – one new route and one VIII,8, so she gave her (very understandable) apologies. The forecast was excellent, so I pottered up to Coire an Lochain by myself to check out the far right hand side of the crag. It’s probably fair to say that 99.9% of the Northern Corries have been well and truly explored by several generations of keen instructors from Glenmore Lodge. However, given that there’s always the chance of finding the 0.1%, and also that I’d been giving a talk recently, extolling the virtues of new routing in Scotland and encouraging folk to look at existing venues with “New Route Eyes”… so I thought it appropriate to check out this wee area. It looked like the ground immediately right of “Cut Adrift” could hold give a short route, and at a grade I hoped I’d be able to solo.

I found it a bit nerve racking starting out to solo a route, but things quickly settled down and progressed quite quickly to a fine blocky ledge below the steep final wall. A flaky crack lead out left, but I must admit it took a couple of nervous attempts to start the crack. Once committed it was of course much easier than contemplation, and I was soon standing on the plateau. Coire an Lochain doesn’t have too many reasonable IIIs, so, whilst the route is fairly minor, it is a useful addition, especially as it makes a good early season line. I must admit to chuckling about the name – I’d stood on the blocky ledge for a good ten minutes, muttering to myself about I should start the final flake crack… seeing as the route lies close to Torquing Heads and Torquing West… ‘Torquing To Myself’ seems appropriate.”

Simon sent his account to Andy Nisbet, editor of the highly authoritative New Routes section in the SMC Journal, who was quick to respond. “It’s unlikely that Torquing to Myself hasn’t been done before,” he wrote. “Glenmore Lodge instructors including me, have taken folk up routes in that area, but it’s difficult to be precise about exactly where we went.”

I pushed Andy a little further, and asked whether Torquing to Myself would be recorded in next year’s SMCJ.

“It’s difficult to know what to do with this route,” Andy replied. “It took some persuading to include [the nearby] Cut Adrift (in the SMCJ) but I actually went and did it myself. And it was good, and not what I’d done before (but others might have). But Simon Y’s line has been climbed before, or roughly so, because it’s less steep than Cut Adrift and does bank out a lot, in fact in mid-season is Grade II. But it’s a bit like Sneachda and the routes that were regular Glenmore Lodge routes but never recorded (like the ribs between the Trident Gullies). After several attempts to claim them, Allen Fyffe did put them in the last guide, and rightly so. The area on the right side of Fiacaill Buttress is another area used by instructors. I’ve had a couple of claims, but I know the routes have been done hundreds of times and have refused; again maybe they should be in the next guide. The “twin ribs” are another instructor area that perhaps should be in the guide, as they are good fun if rather trivial to more experienced folk.

But that’s not a reason why they shouldn’t be recorded because, as Simon points out, he enjoyed the day and if he felt it worthwhile, then so will others. So I think I’ll put it in the SMCJ as a first recorded ascent. I don’t actually know what I did [in this area] – you just took your two students and soloed up ahead of them leading, pointed out runner placements and generally supervised, not thinking about where you went or recording it; there was enough to worry about. Glenmore Lodge have stopped that sort of instruction these days.”

“I’m pretty relaxed about all of this, “Simon responded, “but if I had to choose, I think I’d come down on the side of recording all routes, and if this means that we document some routes as first recorded ascents, then that seems in my view to be a positive thing. I think we’ve moved on a long way from the days of ‘don’t record’.”

So the conundrum – should we record good and accessible lines in popular areas that are known to have unlisted ascents (such as the Northern Corries), or avoid any possible ambiguity by purely focusing on new routes (typically very hard) that are more certain to be breaking new ground?