Posted on December 2, 2013 by Simon Richardson 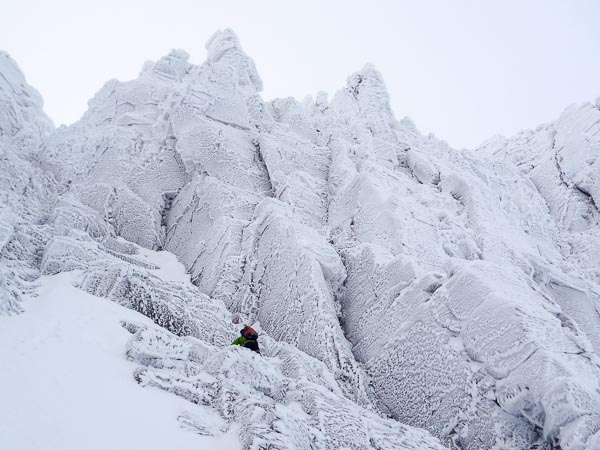 Lee Harrison moving up to the foot of Snuffleupagus (IV,6) in Coire an Lochain in the Northern Corries. The route follows the line of corners directly above Lee’s head. (Photo Michael Barnard)

On November 23, Michael Barnard and Lee Harrison climbed Snuffleupagus (IV,6), a new two-pitch line in Coire an Lochain on the very left side of No.4 Buttress. “It starts up grooves and corners parallel to and left of Oesophagus,” Michael told me. “It then moves leftwards to finish near a route called Sarcophagus which I chanced upon a couple of years ago. That had been done on the solo so the bleak name seemed justified, but this time we decided to go for something more upbeat!”

Given the active and constructive recent discussion about the recording of routes on popular cliffs, I asked Andy Nisbet’s opinion on Lee and Michael’s route. “Snuffleupagus is different,” Andy explained. “I’m guessing a bit without going there, but I suspect it wouldn’t have been considered as a route until recently. But nowadays folk treat cliffs like crags – every feature can be climbed and claimed as a new route. Creagan Cha-no is like that and folk are liking it. So perhaps the old school like me should just go with the times… it will go in the Journal, although hopefully I’ll get a chance to look at it first!”