Posted on December 3, 2013 by Simon Richardson 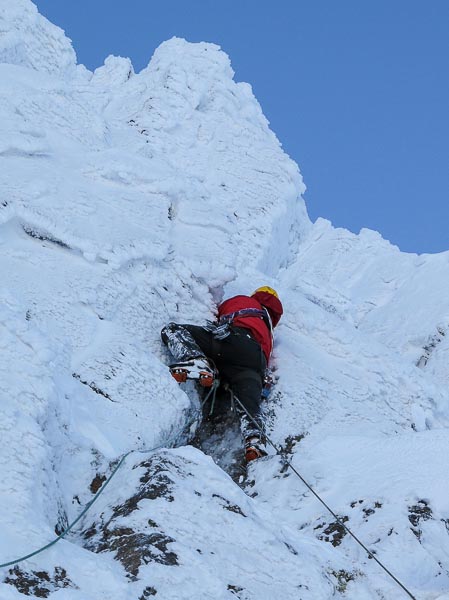 Roger Webb on the first ascent of Moonflower, a new Grade III in Coire nan Clach on Braeriach. Along with the mixed climbs high on Ben Nevis, the remote high corries of the Cairngorms are invariably the first areas to come into condition every season. (Photo Simon Richardson)

Autumn is a great time to explore the high Cairngorms. The north-west facing Northern Corries rime up quickly with the first snows of the season, but it is the likes of Braeriach and Beinn a’Bhuird that truly hold the cold during early season temperature variations and thaw. The climate in the corries cutting deep into the Cairngorm plateau is different to the front line crags on the northern flanks of the massif.

Aspect is important too. The west-facing Coire nan Clach on Braeriach yielded a couple of new lines to Roger Everett, Roger Webb and myself after the first blast of winter westerlies in early November. Moonflower (III) on Alaska Buttress, and RRS Rib (II) up the ridge to the right, were a good opportunity to blow away the summer cobwebs. The following weekend, all north and west-facing crags had been stripped bare by warm south-west winds, but a sharp freeze had transformed the vertical-stepped corner cutting through the buttress left of Powerpoint in the sheltered east-facing Coire Bhrochain. This gave Roger Everett and I Petzl Buttress, a good III,4 climbed on well-frozen turf, new squeaky ice and hard re-frozen snow.

On the last Sunday in November, Roger Webb and I teamed up to visit the obscure East Meur Gorm Craig on Ben Avon. The Sheep, The Sheep (III,4) and Sheep of Destiny (III,4) are probably the best winter lines on a largely disappointing crag comprised of massive exfoliating granite, but nevertheless we had the dubious satisfaction of adding the first (recorded) winter routes to the mountain.

Earlier in the month, The Stuic on Lochnagar – the most accessible high venue in the Eastern Cairngorms – gave a good four pitch V,5 to Roger Everett and myself up the series of steep corners to the left of Millennium Buttress.

These routes will likely only be of interest to a small handful of climbers, and will be quickly lost in the back pages of the SMC Journal. They will almost certainly never merit full descriptions in upcoming guidebooks, but they do demonstrate the exploratory fun that can be had by looking around a new corner or two!