Posted on December 9, 2013 by Simon Richardson 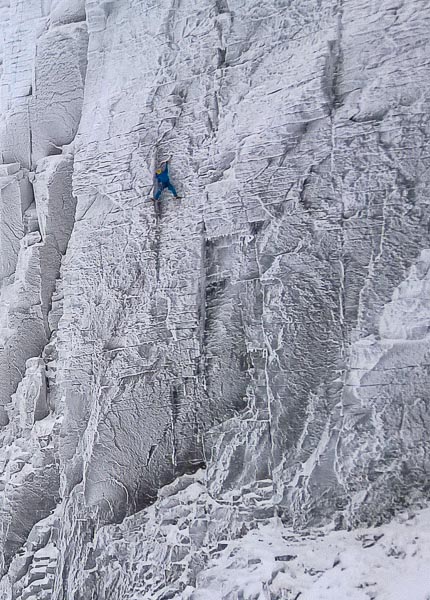 Greg Boswell making the first winter ascent of The Demon (IX,9) in Coire an Lochain in the Northern Corries. The route starts from the lower left corner of the wall, whilst the winter-only line of Demon Direct, first climbed by Alan Mullin in 2001, takes the right-facing corner just to the right. Both routes then continue up the same upper crack system. (Photo Stewart Whiting)

Greg Boswell and Dougie Russell scored a notable coup in the Northern Corries on Saturday December 7 with the first winter ascent of The Demon on No.3 Buttress in Coire an Lochain. This rarely visited summer E2 was first climbed by Brian Davison and Andy Nisbet in August 1983, and takes a thin right-trending line up the steep front face of the buttress. This wall was already home to three of Scotland’s most well known winter test-pieces. Happy Tyroleans (IX,10) was first ascended by Austrians Florian Schranz, Heinz Zak and Egon Netzer during the 2001 International Winter Meet, and two weeks later Alan Mullin added Demon Direct (IX,9) with Steve Paget. In January 2012, a third winter route was added to the wall when Charly Fritzer and Matthias Wurzer’s climbed Pfugga-lule (VIII,9).

It was Alan Mullin who made the first serious winter attempts at climbing The Demon in 1998, but he was soon diverted onto the impressive direct line of Demon Direct that leads straight up into the upper crack system. In a world of two-point crampons and leashed tools, this was a futuristic vision, and Alan only succeeded on his fifth attempt three years later, after being spurred on by the Austrian ascent of Happy Tyroleans. Alan’s willingness to push the ethical boundaries on some of his new routes, and his straightforward honesty in describing them, earned him the title of ‘enfant terrible’ of Scottish climbing, but Demon Direct stood out as a landmark ascent in his career. Not only was it one of his finest technical achievements, but Alan’s determination to climb it ground up set the ethical standard for this style of route.

Standards have of course moved on over the intervening 12 years, but even so, Greg’s on sight ascent of the true summer line was no pushover. “It was a really fun route with some super technical climbing and a fairly intense lower section away from the gear,” Greg told me. “The upper crux was some of the thinnest climbing I’ve done in the Cairngorms on those granite rounded ledges that we know and love so much!”

Greg finished the first pitch by making a hard traverse right to the belay ledge of Demon Direct and Happy Tyroleans, as he knew there was no places above for a belay. Dougie then led off to gain the main crack system shared with Demon Direct.

“The Demon was probably around IX,9 and definitely deserved three stars,” Greg enthused. “It’s one of the best routes in the corrie that I’ve done to date!”