Posted on December 10, 2013 by Simon Richardson 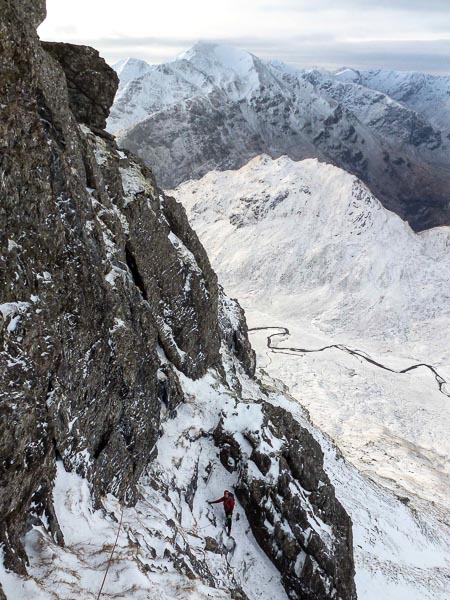 Dave McGimpsey high on the West Face of Aonach Beag during the first winter ascent of North Buttress (III). The Mamores are in the background. (Photo Andy Nisbet)

“I never thought I’d go to Aonach Beag from Glen Nevis,” Andy Nisbet writes. “I had it in my head it was such a long way. And Simon and Helen going there the day after last year’s SMC dinner didn’t encourage me; Simon does like the long walks. But I was watching a DVD while wondering where to go with Dave McGimpsey the next day, and suddenly this helicopter flew across the cliffs of Aonach Beag, high and west facing. Just the perfect aspect after a big storm from the west had brought a sudden drop in temperatures. West facing should be frozen and east facing buried and insulated.

Only one snag, how do you reverse the DVD and stop at the right point? Now there aren’t many climbers who find this is as hard a task as finding a new line; in fact I might be unique. But I finally succeeded and the new line was quickly spotted. Now for the next problem, how to note it down. Quick thinking, or so I thought; photograph the TV screen, transfer to the computer and print it out. Later Dave said, “why didn’t you just play the DVD on the computer?”

So back to the mundane tasks, how to persuade Dave to get up at 5am, how to drive on icy roads to Glen Nevis and would we have to wade up to the crag? Much to my amazement, you can actually see the West Face of Aonach Beag when driving up Glen Nevis, and my worry that the new line might just be a walk on grass (it did look very green on the DVD) suddenly changed to how steep and rocky it looked, and would it be possible. Mental note: look at crags from a helicopter as the lines look easier.

It turned out the crag isn’t nearly as far as I thought but it is a long way up, and that equates to steep. And the buttress we’d chosen, the one left of a prominent gully, was steep too. But there was a nice deep groove with quite a lot of ice (conditions were surprisingly icy, but it had been a sudden freeze) and a big flat chockstone, which would have been awkward without the good placements in the ice. This lead on to an easy ramp out left to the crest of the buttress. Dave’s pitch had a smooth start on slabby rock but then turned easier, and soon we were on top, unexpectedly quickly and wondering how to get down for another route. We gambled on the bottom end of the crag first and that didn’t work, so it was annoyingly back up to try the top end. There was an easier slope here but it was further, even without our detour.

The next potential line was the buttress right of the prominent gully. It did look smooth at the bottom but a sneak round the corner showed up some big rock crevasses and a likely way up. It was easy to get into the crevasses, although we did have to jump into one, but not so easy to get out. Still these tricky moves weren’t exposed so we soloed up until we reached the upper slab. A crack-line on its right side proved more awkward than it looked, with a bulge and the crack closing above, so it was lucky we roped up. It was still cold and windy on top but even the Ben had cleared and we admired great views all round. And there was time to return by the longer Glen Nevis meadows and still make the car in daylight.

Now exactly what we did is not so easy, as the crag is only summarised in Simon’s Ben Nevis guidebook. There’s little doubt that the buttresses we climbed were the ones holding the original summer routes; the crevasses and the final slab of ‘Crevassed Rib’ were a giveaway. We graded North Buttress (the left route) III and Crevassed Rib IV,5; both about 100m long.”

1 Response to Aonach Beag (We Hope)