Day of The Doctor

Posted on November 26, 2013 by Simon Richardson 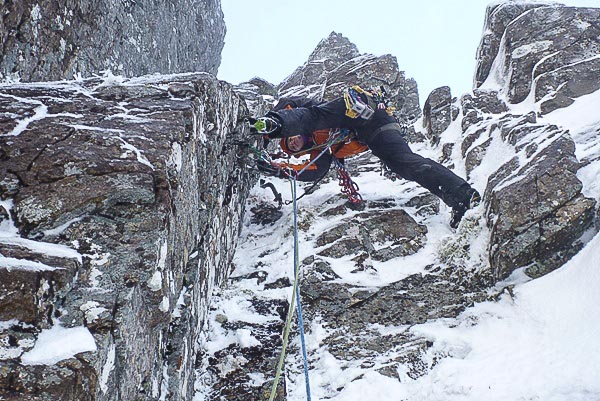 Helen Rennard climbing pitch two of Day of The Doctor (IV,5) on Ben Nevis during the first ascent. The route was repeated next day by Robin Clothier and Pat Ingram taking a more direct line on the final pitch. (Photo Simon Yearsley)

“Over the weekend, freezing levels seemed hard to predict, with anything from 900m to 1100m for the West, depending which forecast you chose. So Helen and I banked on going high, and headed over to the Ben. We were in a new route mood, so we headed up to North Trident Buttress to look at the buttress tucked between Nereid Gully and Left-Hand Ridge. The buttress is fairly small, but does have a very obvious and very fine looking ramp line on its right hand side. From below, the ramp looked to be about grade III, but, as is often the case with features like this, as soon as you set off, the climbing proved to be a bit harder. Short steep steps with not so great gear lead upwards… but I then decided to head rapidly downwards in a silly 7m fall when an axe ripped. The rope caught in my crampon, spinning me into an inelegant upside down clattering fall. A peg just below me ripped, but a lower sling (and Helen’s belaying!) caught me.

I’ve taken very few leader fall in winter, and was a wee bit shaken… but with Helen’s encouragement, and few giggles at the daft position of me being lowered back to the belay with my leg high above my head, I dusted myself down, and I set off again. The ramp is a very fine feature and gave two great pitches before joining Left-Hand Ridge above its crux. We followed the excellent horizontal arête of Left-Hand Ridge for one pitch, and then spotted a series of turfy grooves immediately right of the crest of the buttress between Jubilee Climb and Nereid Gully. This gave a final 50m pitch before the angle kicked back and we sauntered to the top.

Thinking about a name for the climb is always a fun part of new-routing. Chatting through different ideas, we realised that over 10 million people across the UK were going to be glued to their TV screens later than evening watching a 50th anniversary episode of Doctor Who. So, the name was easy – Day of The Doctor.”

The route was repeated next day by Robin Clothier and Pat Ingram. “Robin and Pat climbed a slightly better final pitch,” Simon told me. “Above the flat section of left-hand ridge, where we climbed turfy grooves on the right of the arête, they climbed the deep groove in the arête itself. We’d looked at this but time was pressing, but it’s probably a better finish at the same overall grade.”