All Eyes on The Ben

Posted on November 25, 2013 by Simon Richardson 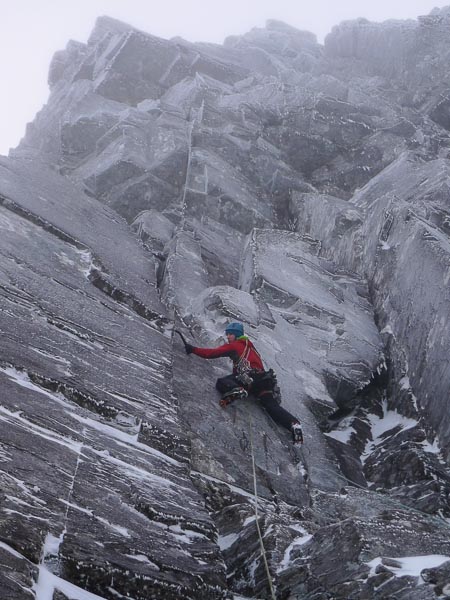 Tony Stone making the third ascent of Arthur (VIII,8) on Number Three Gully Buttress, Ben Nevis. The first winter ascent of this imposing line was made by Bruce Poll and Tony Shepherd in 2004 and was the third Grade VIII to be climbed on the mountain. (Photo Iain Small)

If last weekend’s activity is anything to go by, Ben Nevis has taken over from the Northern Corries as the venue of choice for high standard early season mixed. Harry Holmes and Dan Tait set the tone on Thursday November 21 with an ascent of the steep corner-line of Cornucopia (VII,8) on the left flank of Creag Coire na Ciste. This route has become something of a modern test-piece, but it can be even more challenging early in the season when the tricky entry pitch is not banked out by tens of metres of snow in Number Three Gully.

The following day was forecast to be a little warmer, but Iain Small and Tony Stone decided to take a chance and head up to the Ben to take a look. “Luckily the freezing level kicked in below the Number Three Gully Buttress area,” Iain told me. “The snow pack is pretty impressive for this time of year, so no struggling up snow-covered scree! Conditions were pretty icy with some neve even on bigger ledges and the rock was getting rimed and verglassed in the damp mist. We climbed Storm Trooper (VIII,8) by the original start up the flake-crack and finished up the final chimney of Cornucopia. It was very good route, which deserves to be climbed more often. Somehow, it seems to have been overlooked compared with other surrounding lines.”

On Saturday November 23 there were plenty of strong teams in action on the high cliffs of Coire na Ciste. Andy Inglis and Neil Adams made an ascent of The Secret (VIII,9), whilst nearby, Blair Fyffe, Richard Bentley and Robin Clothier made an early repeat of Archangel (VII,7). Across on Number Three Gully Buttress, Iain Small and Tony Stone made the third ascent of Arthur (VIII,8). This steep and rarely climbed summer HVS was first climbed in winter by Bruce Poll and Tony Shepherd in January 2004, and was repeated by Ian Parnell and North American ace Kelly Cordes during the 2005 BMC international Meet.

The following day (November 24), Pete Macpherson and Erick Baillot visited the Archangel area and made the second ascent of Avenging Angel Direct (VIII,8). Direct, steep and uncompromising, this is one of the finest mixed lines on the mountain and was only first climbed in its entirety by Neil Adams and Jim Higgins last February.

Neil Adams and Andy Inglis made it a memorable weekend with an early repeat of Apache (VIII,9), the steep crack-line to the right of Sioux wall on Number Three Gully Buttress. Next door, Harry Holmes and Helen Rennard made a smooth ascent of the modern classic Sioux Wall (VIII,8). “It was brilliant and really enjoyable,” Helen told me. “There were some amazing hooks, and it was never that hard. We started late and finished in the dark but it was still clear with an amazing starry night.”

2 Responses to All Eyes on The Ben