Posted on February 6, 2013 by Simon Richardson 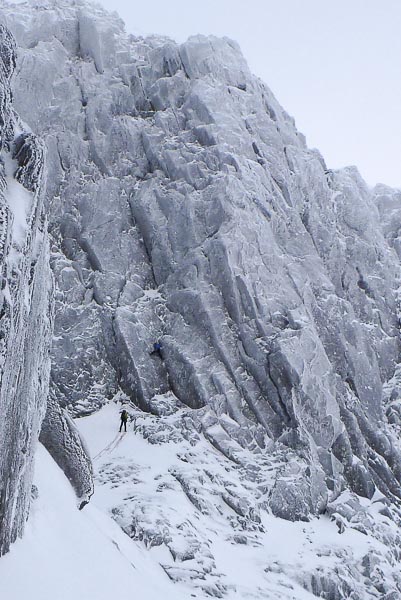 Jim Higgins starting up Avenging Angel Direct (VIII,8) on the left side of Creag Coire na Ciste on Ben Nevis. The route follows the compelling line of impending corners trending up and left, and is one of the finest mixed lines on the mountain. (Photo Helen Rennard)

When Chris Cartwright and I started exploring the mixed potential of Creag Coire na Ciste on Ben Nevis in the late 1990s, it was clear that there was a major mixed line to be climbed up the huge recessed corner system between Darth Vader and South Sea Bubble. Angles are deceptive on this part of the cliff, but the collection of stepped corners were clearly very steep and appeared to individually overhang in two directions. With Nevis mixed climbing still developing we were a little scared of this daunting line, and ran away from it on several occasions. The first ascent of Babylon in April 2001 for example, was compensation after talking ourselves out of trying it yet again.

Chris eventually convinced me that the only way we were going to climb the route was to approach it with absolute focus with no back-up plan to fall back on. His strategy was correct of course, and in February 2005 we climbed Archangel, which took a cunning line weaving its way up the main feature, but cleverly avoided all the steep corners. The burden of expectation weighed heavily on me that day, and I found it a difficult ascent. Subsequent repeats have found it reasonably amenable and the grade is settling down in the VI,7 to VII,7 range. Whatever the difficulty, Chris and I were proud of our contribution and were happy to let others seek out the steeper and more direct alternatives.

Archangel was climbed relatively late in the initial phase of Nevis mixed development. Chris and I nearly left it too late, for with no knowledge of our route, Nick Bullock and Owen Samuels climbed the first two pitches of Archangel the following season, and then continued up the steep upper series of corners thinking it was a completely new line. Their climb was such a significant variation however, that it deserved its own name – Avenging Angel (VII,8).

The challenge of the lower corners still remained, and in February 2011, the powerful team of Iain Small and Tony Stone climbed these to join Archangel. From here they could have continued up Avenging Angel (in retrospect, Iain says that this is what they should have done), but instead they found an independent finish via a steep bulging offwidth. They called their climb Angels with Dirty Faces (on account of the muck they accumulated whilst cleaning out the cracks) and graded their route VIII,8.

Despite this activity, the true challenge, a complete ascent of the line of corners still remained. Last Saturday (February 2), Jim Higgins and Neil Adams met this head on by linking the two lower corners of Angels with Dirty Faces with the upper two corners of Avenging Angel. Although Jim and Neil covered no new ground, their climb was a significant winter ascent resulting in the three star Avenging Angel Direct (VIII,8).

It has taken over 15 years, but the vision of a direct ascent of the Creag Coire na Ciste corners has finally been fulfilled.