Posted on November 5, 2013 by Simon Richardson 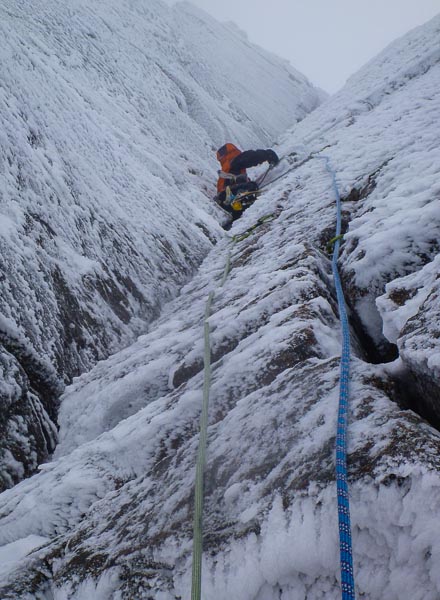 Simon Yearsley making an ascent of Savage Slit (V,6) in Coire an Lochain on Cairn Gorm. Savage Slit reliably comes into condition with the first snows of the winter and is a popular early season choice. (Photo Helen Rennard)

Strong westerlies brought the first real snows of the 2013/214 Scottish winter season during the last days of October. There are rumours of an ascent of Fingers Ridge (IV,4) in Coire an t-Sneachda during the first snowfalls last week, but the first batch of this season’s winter routes were climbed over the weekend and Monday.

Blustery conditions and poorly frozen turf, meant that many folk climbing in the Northern Corries went away empty handed over the weekend, but further west, parties were more successful on the mountaineering classics suxh as the Aonach Eagach and Ledge Route on Ben Nevis.

Yesterday (November 4), Duncan Hodgson and Mark Chadwick visited the Northern Corries and climbed the modern classic Hookers Corner (VI,6). Next door on No.4 Buttress, Helen Rennard and Simon Yearsley made an ascent of Savage Slit (V,6).

“Sensible route choices are always important, but none more so than with the first snows of the winter,” Simon told me. “It’s tempting to rush out to “grab the white stuff”, but it was pretty obvious that from following the forecasts that no turf would be frozen by Monday (as Helen found out the day before when she’d taken a walk into Coire na Ciste on the Ben to check out conditions), so it was all about routes which can be climbed in a good coating of snow but don’t rely at all on turf. Routes like Fingers Ridge, Crest Route, Crypt Route, Hookers Corner Savage Slit and Mess Of Pottage are good objectives, and yesterday was no exception!

Helen and I walked into Coire an Lochain with deep snow in the boulders around the eponymous lochan and the cliffs plastered with rime and heavy snow. Savage Slit was beautifully white, with lots of effort needed to uncover the cracks for gear, and coupled with the wind it was a full-on reintroduction to Scottish winter! Mark Chadwick and Duncan Hodgson found similar conditions on Hookers Corner, and later in the day we also bumped into Lou and her partner after they’d done a route on Mess of Pottage, and also heard later that Andy Nisbet and Dave McGimpsey enjoyed a fun (and possibly slightly more sheltered) day out on Fingers Ridge. I must admit I did feel pretty tired after the Ice Factor Festival of Ice Comp on Saturday, but walking back down to the car park, we both agreed that it felt wonderful to be back in the swing of things… here’s to more white stuff!”