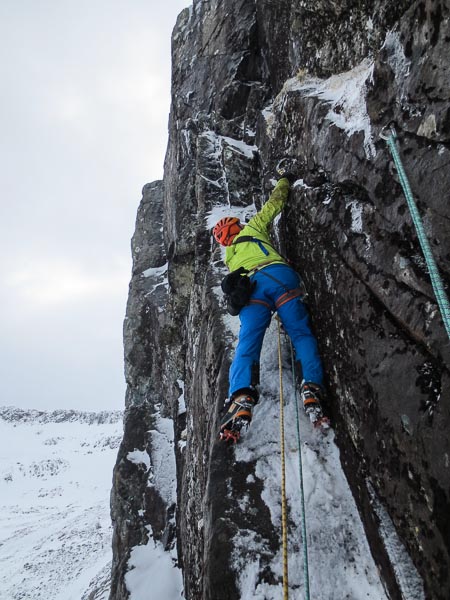 On April 26, Guy Robertson and Pete Macpherson visited Ben Nevis. They had their eye on an objective higher up the mountain, but with the big routes buried under thick unstable snow, they opted for a safer low level option and made the second ascent of Steam Train which they thought weighed in at about VII,7

Steam Train was first climbed as a summer route by Doug Hawthorn and Noel Williams in July 1984 and graded HVS. Dave MacLeod and visiting US climber Alicia Hudson made the first winter ascent in 2007 and graded the route VI,7.

“It looks like Dave started up The Ramp and missed the first pitch of Steam Train,” Guy told me. “This was a notch harder than the top corner, so the grades make sense. It’s definitely a quality wee route and a good option when the weather and/or snow are conditions unfriendly!”