The Smear – Repeated at Last! 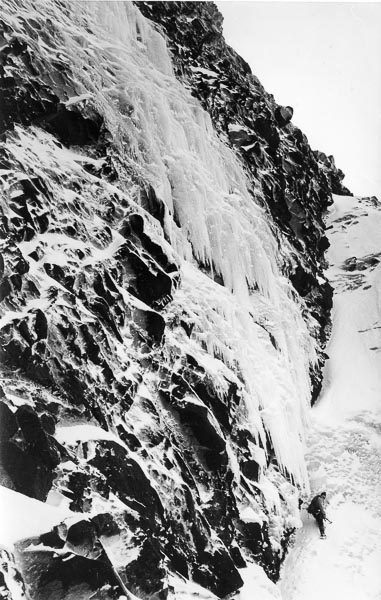 Doug Scott below The Smear (V) on Sgurr a’Mhadaidh just before the first ascent in 1979. The route was not climbed again for 34 years until Andy Huntington and Mike Lates repeated it this April. Scott later wrote that this was his hardest new route on ice. (Photo Ginger Cain)

Mike Lates and Andy Huntington rounded off an exceptional 2013 winter season on Skye with the second ascent of The Smear (V) on the North Face of Sgurr a’Mhadaidh.

“Mick Fowler once told me that he’d only ever seen it touching down in the mega winter of 1986,” Mike told me. “I never thought it would happen again, but I watched it grow considerably over the first two weeks of April. Andy’s sailing to Oz this summer so needed very little encouragement to drop everything before the thaw arrived. Some pressure built with a text from Blair Fyffe asking if Icicle Factory was in nick, which I just had to duck and hope he didn’t interpret my silence as a yes – sorry Blair!

Heavy rain overnight luckily cleared by the morning (April 12) and we reached the freezing level just below the climb. After studying the B&W shot of Doug Scott beneath it (on the first ascent in 1979) Andy had rehearsed the committing start in his head. I was blown away by quite how rapidly he went for it and very relieved when he finally placed a screw after 20m. One swing explained Andy’s speed – the ice was perfect with first time placements virtually all the way. Having worried whether my arms would make it to the belay I found myself, instead, looking forward to leading the second pitch. Even a crampon coming off couldn’t distract from the fun, which was over far too soon.

Looking at the B&W shot again, Doug and Jim had far less ice than us – in fact it doesn’t even appear to be touching down. They must have been wearing wings that day!”