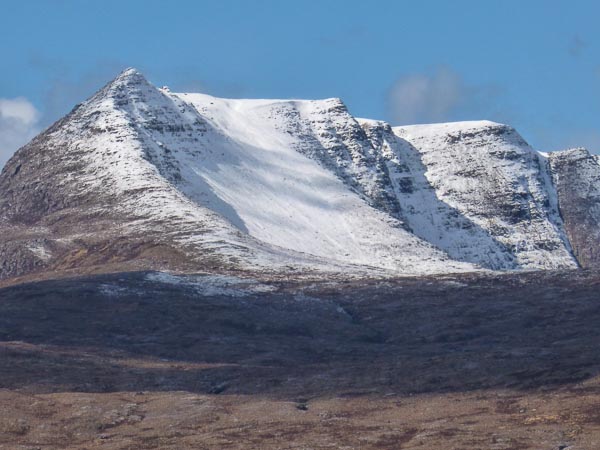 Bob Reid and Ian Crofton visited Ben Mor Coigach on April 8 and did a little exploring.

“Conditions were excellent,” Bob told me. “There was plenty of snow and ice on the north faces and we had good weather. We walked in toward Lochan Tuath and went southwards into the corrie at the northern end of Ben Mor Coigach. There are several easy gullies in this corrie (which appears nameless on the 1:50,000 OS Map). We passed these by and headed for the left-bounding rib of the corrie. This is much more of a feature than we imagined, and became quite well defined as we got higher. It gave a very good mixed climb. We stuck to the crest and were delighted at the climbing we found. Sandstone steps, grooves and the odd chimney connected by steep snow led directly to the Coigach plateau where the climb abruptly ends.

We didn’t think a [modern] name appropriate for such a traditional route but suggest North-East Ridge of Ben Mor Coigach (285m Grade III).”

The story should have ended there, but it turned out that Bob and Ian were not the first to climb in this corrie. When Bob returned home the latest version of the SMC Journal had arrived with a description of Hyperborea (IV,5) climbed the previous winter by John Higham and Iain Young. “They call the hanging corrie Cadh’ a’ Mhoraire,” Bob explained. “And their route took a rather more serious challenge on the right (west) side of the North-East Ridge.”