Babes in the Wood – Second Ascent

Posted on December 18, 2013 by Simon Richardson 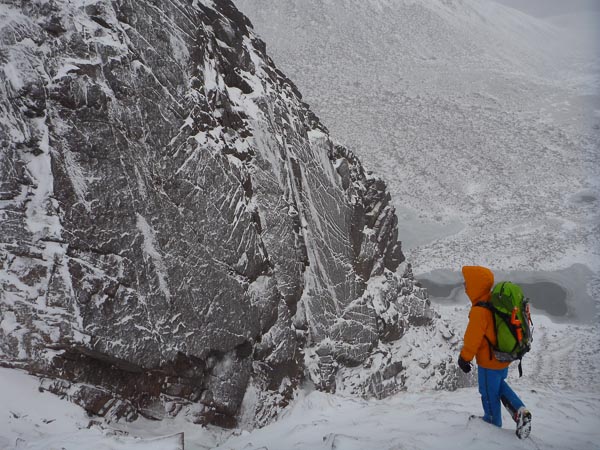 Will Sim looking across Aladdin’s Couloir in Coire an t-Sneachda to the line of Babes in the Wood (VIII,8) after making the second winter ascent. The route breaks through a roof bottom centre, before following the thin diagonal crack which peters out into a thin technical slab – the meat of the route. (Photo Greg Boswell)

On Tuesday December 17, Will Sim and Greg Boswell made the second winter ascent of Babes in the Wood (VIII,8) in Coire an t-Sneachda. This 30m-long summer E2 follows a slanting crack-line on the left flank of Aladdin’s Buttress and provides a very sustained winter pitch with a thin crux at the top. The route was first climbed in winter by Dave MacLeod and Scott Muir in December 2004. It was a well-known winter problem at the time, and the pair only succeeded on their second attempt, after the first ended with a fall for Dave near the top of the route,

“We didn’t really know much about it apart from that it was grade VIII,8,” Will told me. “It was my lead yesterday and it went on sight. Fun steep moves through a roof low down led to brilliant technical climbing up a seamed slab for another 25 or so metres. The gear was just good enough, but it definitely felt bold in places. Although it’s only one pitch, we both thought it was fantastic and worth noting, as VIII,8 is a grade Sneachda doesn’t do particularly well. It’s also a great line and quick to get to!”

Simon Richardson is a passionate Scottish winter climber
View all posts by Simon Richardson →
This entry was posted in Repeats and tagged Greg Boswell, Northern Corries, Will Sim. Bookmark the permalink.