Posted on December 27, 2013 by Simon Richardson 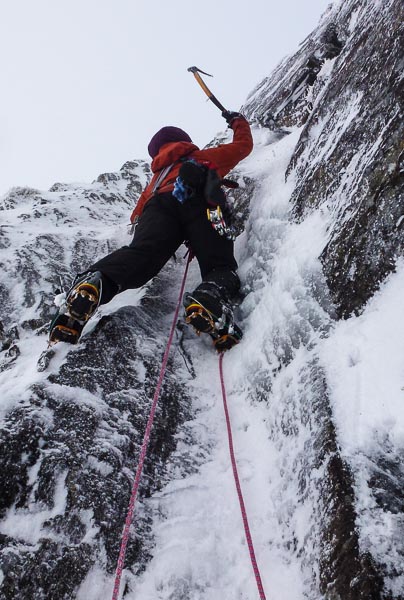 Susan Jensen on the crux section of North Groove on the West Face of Aonach Beag. This route lies just left of North Buttress that saw its first ascent courtesy of Messers Nisbet and McGimpsey earlier in the month. (Photo Andy Nisbet)

“Where to go on Boxing Day?” Andy Nisbet asks. “There had been several storms from the west with nearly continuous gales for a couple of weeks. Some had been cold, and some briefly warm, but in general there was loads of snow; walking was going to be difficult but we were itching to get out. Susan Jensen noted the red colours on the avalanche reports for north to east faces so it had to be a west or south-facing cliff. It had to be somewhere quite high as the last couple of days had been warmer and turf would be insulated except where blown clear. Stag Rocks was suggested but the ski road had been shut for at least 3 days so I guessed it might not be open until mid-morning at least. And to find a new line, with an easier option if the route wasn’t frozen, or of course, if we couldn’t do it.

That left only one option, the lower west face of Aonach Beag. Webcams had shown the west face of Aonach Mor to be blown clear; in fact the cliffs might be too bare. In retrospect I’m not convinced they were current pictures despite what the caption said. We agreed to meet at Laggan rather too early, and an hour later would have worked (isn’t retrospect wonderful), so when we arrived at the top of Glen Nevis, it was lashing rain and we were the only car there. I suggested we waited five minutes and Susan, never mellow about such things, asked what we would do if it was still raining after five minutes. I said we’d set off anyway, but I looked outside and quietly knew it wouldn’t happen, so we didn’t. After ten minutes the rain was easing and Susan’s nougat from Chamonix was finished, so we did set off. Everywhere was incredibly wet, but what would conditions be like?

As we arrived at the Bealach Cumhann in deep sludgy snow with sleet starting, things didn’t look good. The crag was in mist and there was a lot more snow than I was expecting. It was quite a wade down to the stream below the final slope but then things improved. The crag came out of the mist and the snow became more consolidated, not exactly neve though. The plan was for a line Dave and I saw on the last visit, a groove with a steep section on the left side of North Buttress. Conditions then were less snowy and the steep section was a groove with a prominent crack on its right wall. So we had taken a big rack of nuts and cams expecting a technical tussle hopefully with overhead gear. The line was hidden on the approach and even from where we geared up, so it was a major shock to find the groove iced up. Actually it completely threw me and I visualised being stuck under the capping wide crack unable to get back down. Susan saw me hesitating and immediately volunteered to lead it. I’m not sure what her preconceptions were but she thought ‘it didn’t look that bad’.

We soloed up to the groove, quite steep and insecure but with a soft landing. After digging around for a belay and finding nothing, it was obvious the crack would have to be dug out. It took about 5 minutes just to get a good nut placement, and without any ice or turf gear, I tied on to my axes as a back-up. Susan still seemed happy to set off and pulled over the first bulge on good placements, then made good progress. Soon the ice began to thin out and there was little chance of digging out gear on such steep ground. But she managed to bridge out and reach a blob of turf on the left. This allowed further bridging until thick turf helped a big pull out left to avoid the wide crack. There was a belay soon above but even 10m without any runners is a long way! Last time the upper groove had been full of low angled ice but this time it was full of snow, so a quick 60m gained the top.

A gully forming the left side of this buttress had looked very icy last time so we made the long descent round to its base. It was so full of snow that all the possible difficulties were banked out to a gentle Grade I. The next gully left was also full of snow so we down-climbed it back to the sacks. There was a lot of ice around, particularly on the buttress between the two snow gullies, so it seemed rude not to climb it. It held its own gully, and without time to rope up and still make the car in daylight, we decided to solo it. I’m not a purist so I missed out the steepest step by going on the buttress to the left whereas Susan took it direct. I was learning to be more optimistic, so a slabby section higher up had nice wedged blocks on its left although it still involved more pulling on the axes than I like without a rope.

North Groove seemed a suitable name in the traditional theme of the buttress, despite it only being north in relation to Crevassed Rib and in fact well south on the crag. As to the grade, 10m of unprotected 5 seems like VI,5 on the day, but the rest of the climb is easy and we’ve no idea if the pitch will be harder or even something like IV,6 without ice filling the crack. Or whether it forms thick ice and could be IV,5. We’re open to suggestions! The other routes don’t have names yet but the buttress between the Grade I gullies was III,4.”