Posted on December 31, 2013 by Simon Richardson 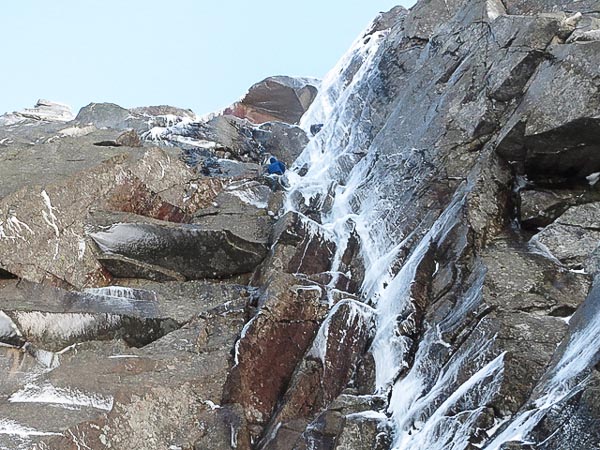 Looking up the line of The Giant on Creag an Dubh Loch from Central Gully. Doug Hawthorn (in blue) is belaying son Uisdean as he approaches the great rockfall scar. The summer crux bulges can be seen in the lower part of the picture. (Photo Robin Clothier)

The weather this December (from a winter climber’s point of view) has been the worst anyone can remember. The first half of the month started very warm and the last two weeks have seen the country battered by a series of deep Atlantic lows. Almost continuous gale force winds, heavy snowfalls and rapidly changing temperatures have made mountain travel very difficult, and climbing conditions almost impossible to predict. As a result Scottishwinter.com has been remarkably quiet, quite simply, because there has been little to report.

All this changed last night when news broke that the father and son team of Doug and Uisdan Hawthorn had made the first winter ascent of The Giant on Creag an Dubh Loch on December 29. This 200m-high vertical corner on Central Gully Wall has been stared at by winter climbers as a futuristic winter possibility for decades, but it was clear that any successful ascent would rely on ice. The route, a difficult E3 in summer (some reckon E4 if the pre-placed protection peg is in a poor state), is so long and steep that it is difficult to imagine enough ice ever forming over the crux bulges on the second pitch. Remarkably however, the exceptionally poor weather over the last two weeks has produced the perfect ice factory for The Giant – a fluctuating freezing level centred around 750m fed by a huge bank of snow sitting at the top of the cliff.

The SMC guidebook to the Cairngorms warns that ‘prediction of prime conditions [on Creag an Dubh Loch] has perplexed even the closest of observers. A spell of very cold weather freezes the springs at source and even a day’s thaw can strip the cliffs bare.’ One of the remarkable aspects of Doug and Uisdean’s ascent is that they predicted the conditions correctly, and were in the right place at the right time to make this landmark ascent.

Details about the climb are a little brief at present, but the first winter ascent of The Giant is without doubt the finest route of the winter so far, and one of the most important winter ascents in Cairngorms climbing history.