Posted on January 1, 2014 by Simon Richardson 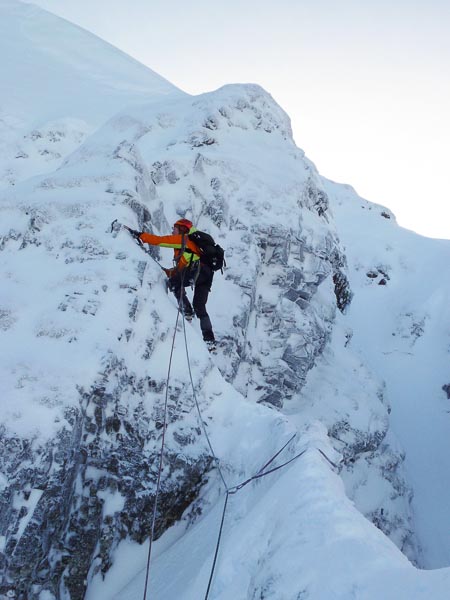 Susan Jensen on the first ascent of Willow Ridge (IV,4) in Coire Garbhlach. This rarely visited corrie on the south-western edge of the Cairngorms massif, lies near the head of Glen Feshie. (Photo Andy Nisbet)

“The name Coire Garbhlach, meaning a rough place, is remarkably well suited,” Andy Nisbet writes. “There used to be a path of sorts but a big thunderstorm perhaps in the early 90s, washed it all away and just left a mixture of rubble and deep heather in the valley bottom. This might have been a bonus for keen local climbers, finding a place where almost no climbers go, yet offering new lines on distinct features (all done now!). The crags are mostly schist and thoroughly rotten in summer, hence the deeply eroded valley and vegetated cliffs (water from schist is much less acidic than from granite; both plants and therefore winter climbers like this).

At the end of November, Jonathan Preston and I were looking for somewhere different from the Norries. Upper Coire Garbhlach is a bit lower but we were hoping it would be frozen, particularly as it was ahead of the recent big insulating dump of snow. I knew from an old picture that the best remaining line was the ridge left of a gully line called Deep Freeze. The gully was climbed by Steve Aisthorpe and John Lyall, as were a number of ice lines in the corrie, but due to a vague (but definitely exaggerated) report in the 1978 SMC Journal about six long ice routes having been climbed, John wrote it up but didn’t claim it. When Jonathan and I arrived, the turf was frozen but the intended ridge line was a bit too bare. The ridge to the right was snowier and much better defined than on my photo, so we Chilled Out and climbed it at Grade III. The nice thing about Coire Garbhlach is that the descent is much easier than the approach.

A couple of days ago (December 29) was a rare good day in an awful spell of weather. Susan Jensen was up to climb, and walking conditions seemed grim, so we needed somewhere fairly accessible. Roping in Jonathan and going to the unclimbed ridge seemed to fit the conditions. Having been irritated once too often by the car park near Achlean being unreasonably far from the road end, we decided to cycle and take advantage of a new section of path. Whether it saved much time is doubtful but it was fun! The snow level was quite high so we made quick time to start but things slowed down as we approached the route, which looked good in its very snowy garb.

Attempts to dig out a direct start only revealed unfrozen ground and a poised block higher up suggested we ought to sneak up the gully for a few metres before gaining the ridge. The ridge held a steep corner line, better frozen except for moves on to ledges piled with snow, which were worryingly delicate when the protection was well below. A nominal warthog could be pulled out by hand; is it worrying when it does push you on even when you know it’s psychological? At least a pinnacle belay was big enough to need tying on with the rope instead of a sling.

That left Susan with a very fine sharp horizontal arête leading to easier ground; pity it wasn’t longer. When we reached the land rover track for the descent, the spindrift from the forthcoming storm was just starting. A mad rush for the Inchriach cafe, which shut at 4pm, failed by 3 days, as it had just closed for the winter. But overall, it was a fine day considering how few there have been. Willow Ridge was 120m IV,4.”