Posted on January 5, 2014 by Simon Richardson 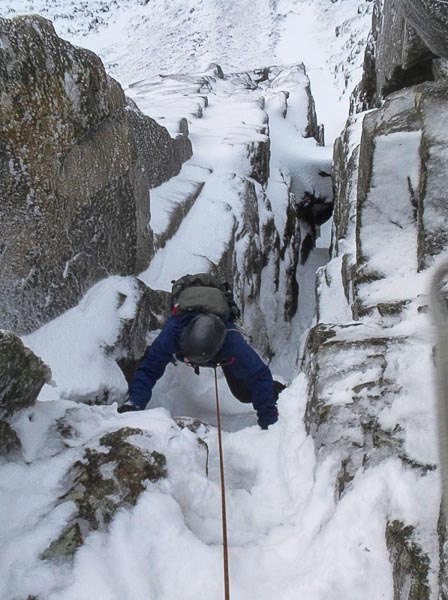 Jim Wylie following a new IV,5 gully in Coire na Banachdaich in the Cuillin. The route was climbed with a minimal rack of two slings and a single nut as the pair were not expecting to find any worthwhile climbing conditions that day. (Photo Mike Lates)

It’s interesting how different days have yielded better conditions in different parts of the country throughout this prolonged series of storms. On Skye for example, New Year’s Day was the only one with easterly winds forecast, so Mike Lates and Jim Wylie decided to head for a section of the Ridge and hopefully get a view of the Inaccessible Pinnacle.

“New Year’s day had the best forecast over the festive period, so my initial plan was just to take in as many views on the Ridge,” Mike explained.

“Instead we ended up with a cracking new route in Coire na Banachdaich at about 650m level. An 80m-long ‘should be alright with a single axe’ gully with three massive chockstones suspended above, winked at me. Equipped with half a rope, a 240cm and 480cm sling and my lucky nut, we did it in three short pitches (it is hard to throw two axes far!). With two manufactured prussic placements to protect the final 10m of vertical powder, it gave a highly recommended IV,5 that remains unnamed for now.

The crest of the Ridge turned out to be in A1 nick, so aspirant Traversers should keep an eye out for a good window!”

Postscript 9 January 2014: It turns out that Tom Davy, Tam McTavish and Ric Hines climbed this line in January 2012 on the annual St Andrews University Mountaineering Club Burns meet. Given its close proximity to the path and relatively low base, they presumed the line had been climbed before, even though it wasn’t recorded in any guidebooks. Cuillin guidebook author Mike Lates says that he is not at all surprised that such a prominent line had been climbed before, and makes some useful observations on skyeguides.co.uk about the recording of new routes from a guidebook writer’s perspective.

Simon Richardson is a passionate Scottish winter climber
View all posts by Simon Richardson →
This entry was posted in New Routes and tagged Jim Wylie, Mike Lates, The Cuillin. Bookmark the permalink.