Posted on December 25, 2016 by Simon Richardson 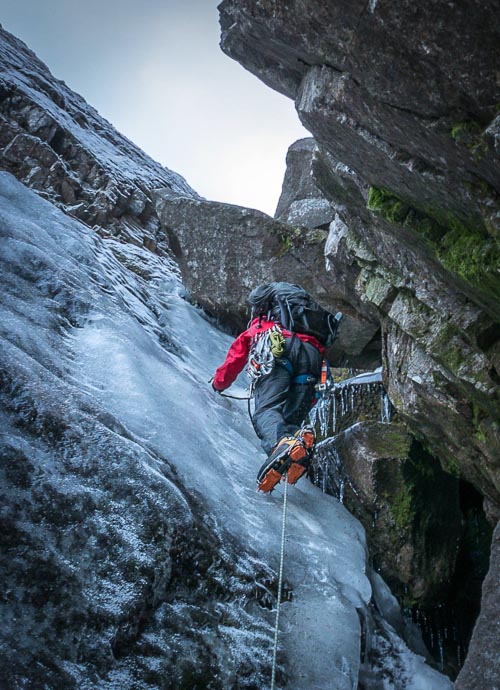 Before the high pressure properly set in at the beginning of December there were some fine days with cool nights. Winter climbing looked pretty hopeless, but the deep gullies high in the Cairngorms kept a little snow and ice. Several enterprising ascents were made during this period, and Adam Archibald sent me an account of an ascent of Raeburn’s Gully on Lochnagar with Gavin Mackenzie. It just shows that all is not lost, even when the hills appear completely stripped of snow and ice.

“We had a cracking day on Lochnagar yesterday (December 4). In general terms, the turf was frozen and there was more than I’d expected in the way of a cosmetic dusting of snow on some of the buttresses, especially the Tough Brown Face. The Cathedral, Sinister Buttress etc were as black as can be. Higher up and as the temperatures plummeted towards the end of the day there was some riming going on.

In terms of the route, it was great sport, bearing no resemblance whatsoever to the beautifully scenic Grade II solo romp on neve and ice which I had in it two years ago – the wonder of winter routes! It kept us guessing right to the top, and there were signs of recent retreat at one or two points. We soloed up to the main ice pitch, mostly on decent ice plus some veg where the stream had washed things away. The ice on said pitch was thin but eminently climbable.

Above, it was mostly good ice underfoot plus some neve, excepting two further chockstone steps, the first of which was only partially iced – awkward – and the second – an almost holdless slab – not at all, giving a perplexing finish within 50m of the top. Gav, belaying directly below, was very glad that I found a solution that didn’t involve a crampon-led slump back to the belay nor the combined tactics which had initially looked necessary.

Topping out to the remains of the sunset above an inversion was utterly magical, perhaps all the sweeter for knowing that we’d managed to climb on a day when the rest of the populace was muddying their boots at Newtyle or freezing their hands on the sea cliffs!”

Simon Richardson is a passionate Scottish winter climber
View all posts by Simon Richardson →
This entry was posted in Commentary and tagged Adam Archibald, Gavin Mackenzie, Lochnagar. Bookmark the permalink.