Winter on The Sentinel

Posted on December 26, 2016 by Simon Richardson 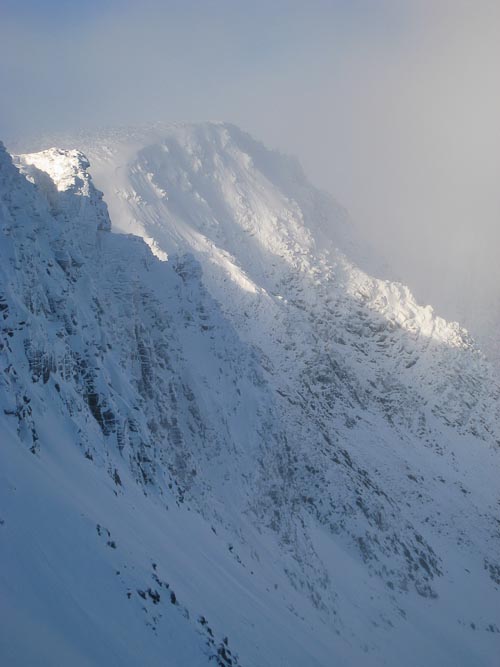 The view looking across the Southern Sector of Lochnagar towards Cental Buttress from The Sentinel. There was a surprising amount of snow on the mountain on December 22. (Photo Simon Richardson)

This winter continues to be a frustrating one. A cold snap before Christmas saw Sophie Grace Chapell and I heading for the Southern Sector of Lochnagar. The buttresses on the left side corrie have a westerly aspect, which makes them a good choice early in the season when cooling winds are coming from the west. Given the popularity of mixed climbing, late December can hardly be considered early season nowadays, but after the warm dry December, the mountains were in autumn condition, and we needed something that would freeze fast.

The wind had blowing for two days and there was a healthy fall of snow the night before so Lochnagar was looking encouragingly white. Another team pushed on to climb Never Say Die (III,4) on the left side of Perseverance Wall, but the shapely buttress of The Sentinel (home of the popular Jacob’s Slabs) was looking in surprisingly good shape. This is the most accessible cliff on Lochnagar, but it can be awkward to find it in good condition. Cold dry North-West winds tend to strip it bare, whilst it can become swamped with snow following a stormy easterly. Thursday was just right with the turf frozen, snow on ledges and ramps, and the steeper rocks rimed.

We made the first winter ascent of Paladin (V,6), a summer Severe I climbed with Chris Hill several years ago. We started up a long ropelength of easy ground to gain the upper two pitches, which provided good technical climbing. The ‘steep slab with small holds’ provided more than enough interest in the gale force winds and we had to wait for the 80mph gusts to subside before making the next move. You pay your money and take your choice in situations like this – we deliberately selected a route exposed to the wind so it would be frozen, but of course we paid the price in terms of having to bear the brunt of the wind.

A large amount of snow fell during the climb and on the way down to the Meikle Col we were up to our waists in snow, and there were deep drifts all the way down the track back to the forest.