Blink And You Miss It

Posted on December 29, 2016 by Simon Richardson 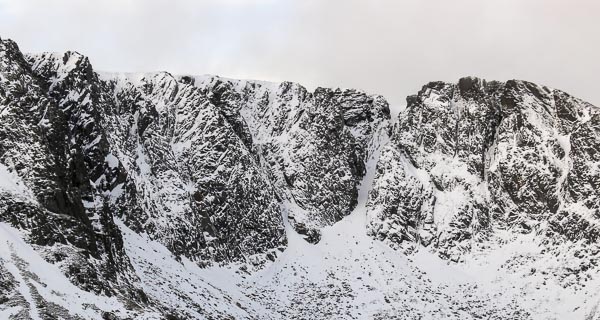 The great North-East Corrie of Lochnagar on the morning of December 28. The eastern edge of the Cairngorms held on to cold air a little longer than the bulk of the Highlands before warm south-westerlies swept in later in the day. (Photo Simon Richardson)

“Blink and You Miss It!” Mark Chadwick exclaimed on Facebook after making a well timed ascent of an attractively rimed Auricle (VI,7) in Coire an Lochain with Duncan Hodgson. Following the Christmas Day thaw and Boxing Day storm, winter conditions made a welcome return on December 27 and several teams visited the Northern Corries climbing The Message, The Seam and The Migrant. Nearby, Andy Nisbet, Sandy Allan and Susan Jensen soloed a couple of new routes on Lurcher’s Crag, and further west ascents of Number Two Gully Buttress and Wedigo were reported on The Ben.

Unfortunately this was a very short weather window as warm weather rolled in to the Western Highlands that night and temperatures were soon above the tops. Lochnagar held onto the cold for a few more precious hours, and Ben Richardson and I nipped in early the following morning to climb the buttress between Resolution Gully and Lunar Eclipse on Perseverance Wall. A succession of turfy grooves provided a good little IV,4 before the temperatures rose in the afternoon. The weather gods have kept us guessing so far this season, but fingers crossed the icy blast forecast just after New Year results in some good winter climbing.