Posted on January 3, 2017 by Simon Richardson 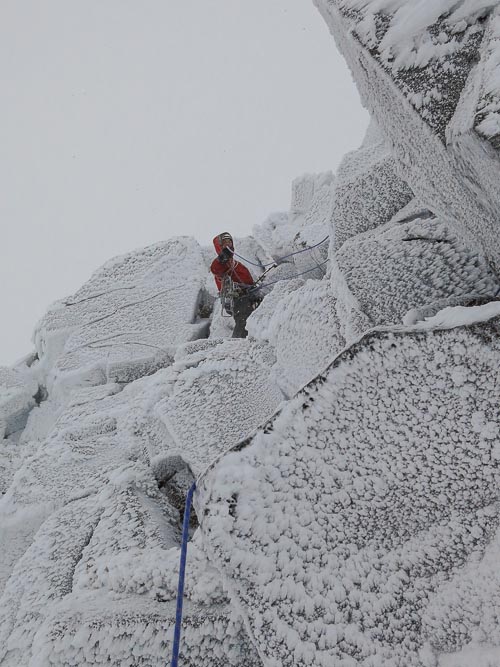 Roger Webb on the easy upper section of Shark (V,7) on Braeriach. High north facing aspects in the Cairngorms were frozen and well rimed on 2 January as a result of snowfall on New Years Day and strong north-westerly winds. (Photo Simon Richardson)

The cat and mouse game of finding good winter climbing conditions continues. The forecast icy blast on New Years Day promised much for January 2, but the snowfall was significantly less than predicted and mainly limited to the Cairngorms and the North-West. Following the previous days high temperatures, it really limited choice to mixed climbs in the Northern Cairngorms or easier classics high up on Ben Nevis.

In the Northern Corries, the more exposed Coire an Lochain proved the best option with ascents of The Hoarmaster, Deep Throat, Sidewinder, The Migrant, Hooker’s Corner and The Overseer Direct. Guy Robertson and Greg Boswell made an early repeat of Open Heart (VIII,9), a very strenuous route linking the first pitch of Ventricle with Ventriloquist on No. 1 Buttress. The turf was reported as ‘a bitty soggy’ on Mess of Pottage in the neighbouring Coire an t-Sneachda, although Droidless was climbed, and across on Creagan Cha-no, Anvil Corner and Anvil Gully also saw ascents.

On the new route front, Andy Nisbet soloed a new Grade II on Lurcher’s Crag and Roger Webb and I made the long haul into Braeriach where we climbed Shark (V,7) and the delightful Stickleback Rib (II). Temperatures rose above the tops today (January 3), and the forecast of a brief colder spell followed by another thaw later in the week will keep us all guessing for a little while yet.