Posted on January 7, 2017 by Simon Richardson 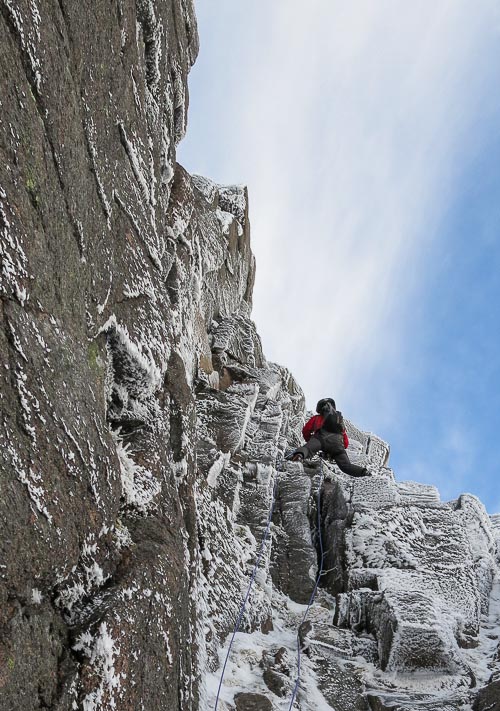 Roger Webb above the awkward squeeze-slot on a new III,5 in Coire an Lochain on Braeriach. Although a short thaw followed by a sudden freeze led to verglassed cracks on the steeper routes, there was enjoyable climbing on lower-angled turfy mixed lines in the high Cairngorms corries. (Photo Simon Richardson)

The topsy-turvy season continues. A brief thaw on January 3 followed by a dry cold snap was not the best recipe for good winter climbing. The Scottish mountains are unusually dry at the moment and the freeze thaws should be consolidating snow and ice instead of merely freezing bare ground. Mixed conditions in the Cairngorms were saved by a couple of hour’s snowfall on Wednesday morning that put a layer of white on the high north facing cliffs. The price for the sudden freeze was verglassed cracks, and those venturing onto the steeper rimed routes in Coire an Lochain in the Northern Corries had a testing time. Nevertheless, several teams battled up modern classics such as The Migrant, Savage Slit, Deep Throat and Overseer Direct, and Murdoch Jamieson and Guy Steven made an impressive ascent of The Vicar (VII,8), noting wryly that their cams were merely being used for ballast.

Further afield, Andy Nisbet found a new Grade II on Mullach Fraoch-choire in Kintail and the following day (January 5) Roger Webb and I visited Braeriach where we climbed a new III,5 in Coire an Lochain. It’s now back to thawing temperatures for the weekend but there are hints of colder weather towards the end of the month. The good news is that the ground is frozen in the high mountains, and snowed up rock and turfy mixed routes will be quick to come into condition once the cold weather returns. Fingers crossed!