Posted on January 9, 2017 by Simon Richardson 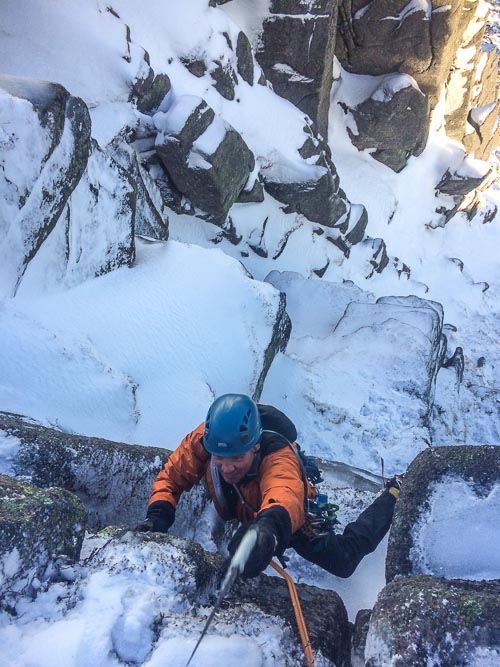 Ivor McCourt pulling out from the niche and out over the blocks at the top of Asthma Finish (III,4) to Plasma Gully on Creagan Cha-no. Despite the lean conditions there were still new additions to be found even on well-known cliffs such as Cha-no. (Photo Jon Foden)

“We had a cracking day out on Creagan Cha-no on Thursday (January 5),” Jon (Nettle) Foden writes. “Although conditions were thin on the trade routes, by sticking to the shady side of the buttresses Ivor McCourt and I managed to find a couple of routes in good condition, one of which may have been a new line. As well as doing Captain Fairweather we headed up Plasma Gully and took a 20m finish up the left wall. Although the line was short, it was really good fun and a great option in these conditions.”

Martin (Wilf) Holland and Euan Whitaker were also climbing on Cha-no that day and climbed Big Boy Made Me (II,3), the gully immediately left of Once We Were Alpinists. “The name is Euan’s based on the fact I had to encourage him to climb it rather than an existing line,” Wilf explained. Upon returning to the valley Euan and Wilf thought the route may have been climbed before, but further research showed that it hadn’t been recorded after all. As always, its worth checking the New Routes section of the Scottish Mountaineering Club Journal <http://www.smc.org.uk/new-routes> if you think you have climbed new ground.