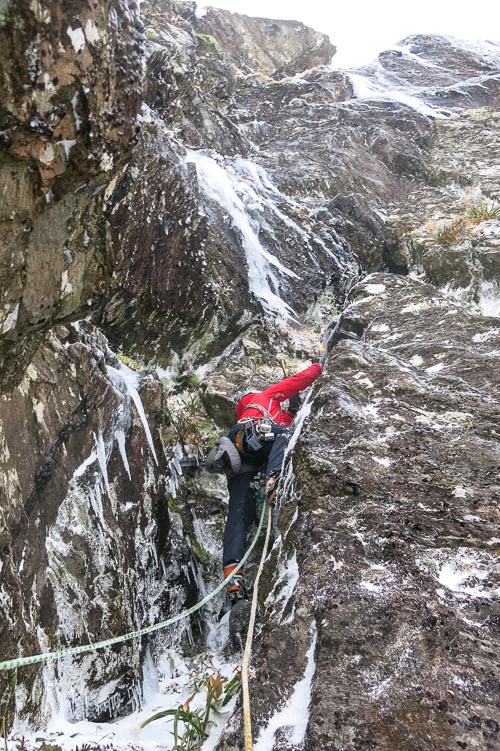 Stuart McFarlane on the first pitch of Clockwork Orange (V,4) on Beinn an Lochain in the Southern Highlands. Last week’s ice blast brought a good variety of routes into condition right across the country. (Photo Brian Shackleton)

“After the strong north-westerlies had been blowing hard for a few days, I arranged to go climbing with Brian Shackleton in Arrochar on January 13,” Stuart explained. “I had an inkling that the exposed Beinn an Lochain may be frozen and icy, and perhaps Bakerloo Line, one of my few remaining Grade Vs in the Southern Highlands would be in? This was confirmed as we battled against the wind, up the North-East Ridge, finding shelter beneath Kinglas Crag. But what’s that parallel line to the right…?”

The result of Stuart and Brian’s visit to Beinn an Lochain was the first ascent of Clockwork Orange (V,4). This takes a parallel line to Bakerloo line, following a right-sloping fault, with key passages on thin ice and ever-increasing exposure. Above the route steps left beneath a roof, before committing to a thinly iced wall above.

The number of Grade Vs on Stuart’s To Do list is unchanged, but there is now another excellent mixed climbing addition to the Southern Highlands!

Simon Richardson is a passionate Scottish winter climber
View all posts by Simon Richardson →
This entry was posted in New Routes and tagged Beinn an Lochain, Brian Shackleton, Stuart McFarlane. Bookmark the permalink.