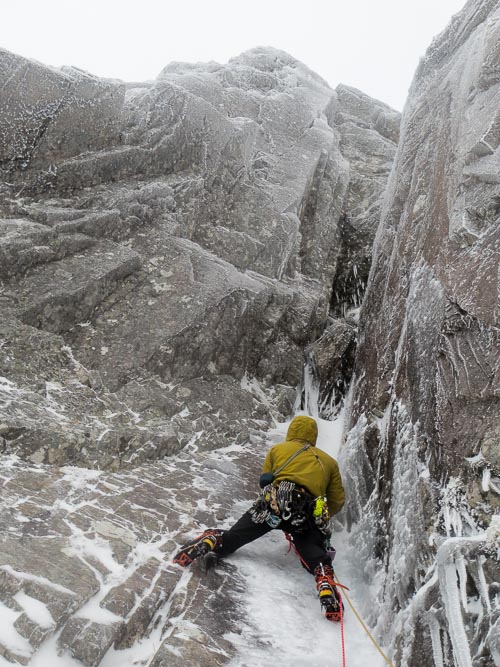 Brian Pollock leading the first pitch of Spartacus on South Trident Buttress on Ben Nevis. The link-up with the rarely climbed Devastation continues up the right-facing corner-crack directly above his head. (Photo Neil Adams)

Saturday January 14 was an excellent day for winter climbing in the Scottish Highlands and a number of excellent ascents were made. One of the most interesting climbs was a link up on South Trident Buttress on Ben Nevis.

“I had a good day on the Ben with Brian Pollock,” Neil Adams explains. “We started up the first pitch of Spartacus and belayed out right after the roof. We then traversed back left above the roof into the right-facing corner-crack directly above Spartacus pitch 1. Where the angle eases, the line trends left and meets the top of Strident Edge. It felt about VII,8 – the traverse left above the roof was the crux, but the corner above was still pretty sustained.”

Initially, Neil and Brian thought they had made a new addition, but their second pitch is common with Devastation that was climbed in winter by Ian Parnell and Andy Benson in November 2008. Devastation is graded E1 in summer and has two technically difficult pitches, but the protection was generally good, and the winter first ascensionists graded their ascent a surprisingly reasonable VII,8. Spartacus (VI,7) was first climbed by Andy Nisbet and Jonathan Preston in November 2002 during the first phase of modern winter exploration the cliff. This quickly led to the realisation that South Trident Buttress makes a fine early season venue, or in this season’s case, a location that comes quickly into condition during a tricky winter!