May The Force Be With You

Posted on February 16, 2015 by Simon Richardson 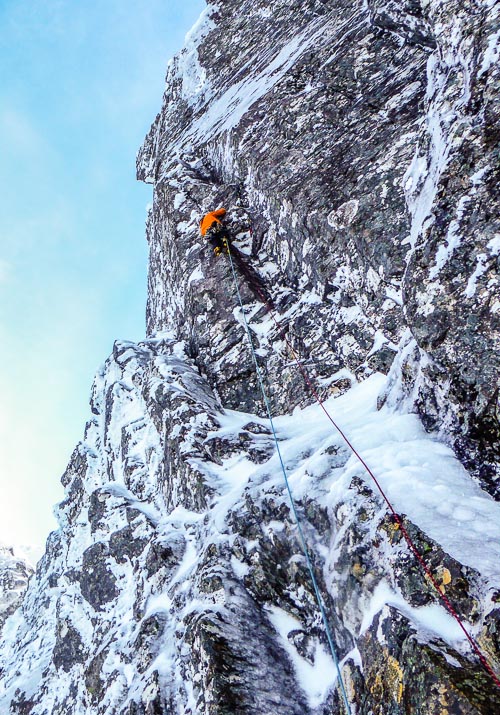 Guy Robertson leading the first pitch of Storm Trooper on Creag Coire na Ciste on Ben Nevis. This was used to access the thin ice smear (above and right of Guy’s head) resulting in a new addition called (in keeping with the Star Wars theme) Han Solo (VIII,7). Storm Trooper has two starts – the one climbed by Guy and Uisdean was the route of the first complete ascent by Andy Turner and Steve Ashworth in January 2008. (Photo Uisdean Hawthorn)

“Uisdean Hawthorn and I climbed a new route/variant on February 11 on the Ben,” Guy Robertson told me. “Very interesting conditions with a fair bit of black rock but lots of verglas and thin ice high up. We climbed an obvious ice smear that had formed directly above the first pitch of Storm Trooper. There’s a wee gully that feeds it from above so I think it’ll come in again reasonably often. I led the first pitch of Storm Trooper – mostly on thin ice, which was very cool – then Uisdean led the smear itself.

Though the climbing was never technically particularly hard, the whole thing was pretty spicy with two pitches of VIII,7 or thereabouts. Uisdean’s lead of the smear was impressive; the ice was maybe only about three inches thick at best, and a lot thinner in places. All in all a pretty cool ‘cerebral’ experience and I’d have thought one of the harder bits of ice the Ben has to offer. Uisdean called the route Han Solo for self-explanatory reasons!”

Postscript 17 February 2015: No sooner had this post been published than I received an enthusiastic email from Tim Neill saying that he and Nick Bullock had made the second ascent of Han Solo earlier that day (February 16).

“I just caught the post on your blog about Guy and Uisdean’s line on the Ciste cliff,” Tim wrote. “Good to read the details… I’d spoken to Uisdean earlier in the week and he’d described the line and randomly over the weekend I’ve been doing a neat film job for Mountain Equipment and Nick Bullock and I managed to repeat the line and get it all on film.

Anyway, the climbing was wild… Nick got Pitch 1 and I managed to make it up the smear pitch… fairly sensational. All of Guy’s comments stand… I hope the film will showcase the great ice on the Ben as well as possible!”