Lurcher’s in the Sun

Posted on February 16, 2015 by Simon Richardson 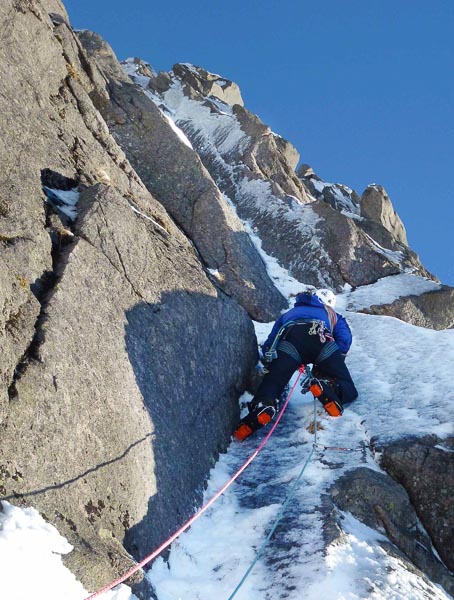 Steve Perry setting off up the crux pitch of Blood Hound (VI,6) on Lurcher’s Crag on the first ascent. The route name fits in with the canine nomenclature on the crag and Steve’s technique of leading bare-handed on difficult pitches and leaving a bloody-knuckled trail. (Photo Andy Nisbet)

“With the choice between warm and cloudy in the west against too little snow in the east, Steve Perry and I went for the east to save a long drive,” Andy Nisbet writes. “It turned out there was a temperature inversion in the west and the tops were clear but we had a good day anyway (February 9). Sandy Allan had to give a talk in the evening but was delighted to join us on a shorter day. I had seen a picture of a pure white Lurcher’s Crag, so white I had to look twice at the date, so we decided to go there.

After several dry days, there was a good track towards Lurcher’s even if everyone seemed to take a different line at the end. We were heading to the summit buttress to climb a groove line that I’d chickened out of soloing a couple of weeks ago. The bright sun had stripped the front face of the buttress during yesterday but the groove fortunately faced away from the sun and had enough ice to justify winter. The grade was IV,4 as expected, and Steve led a second long pitch to the summit cairn. It was a bit of a dash (we called it Daschund) so there was loads of time to do something else, even if it was quite hot.

When Sandy and I had been climbing with Brian Davison a couple of weeks previously, we had looked at a smooth left-facing corner formed in the left side of Summit Ridge. I had persuaded the others that it looked too hard and we had gone for a line to its left (now 101 Dalmatians). But it was a great line and Sandy wouldn’t forget. In fact he reminded me about it every time Lurcher’s was mentioned. Today was no exception and the presence of Steve seemed a further encouragement. I was still highly doubtful but we decided to go down for a look.

The northerly gales and snow had nicely filled the top of Central Gully so the descent was easy. Plus the initial ramp, which had previously put me off the line, was a bit shorter with the build-up. I still wouldn’t have been bold enough but Steve was keen to give the corner a go. He quickly gained the corner and got a couple of good runners in; things were looking hopeful. The main corner would give about 15m of climbing, and there were occasional blobs of turf visible, but would it have a crack for gear and holds between the blobs? Steve made good progress until the runners were distinctly below his feet. There didn’t seem to be much of a crack and soon he announced that the next move was make or break; he made it. After a while placing a peg which he said was poor (it very much was) and a few scrapes with the feet, which speeded up our heartbeats (presumably his too), he continued to edge up the corner. Another peg was apparently better (it was a lot better) and progress speeded up. There was a final thin move to reach good turf, then he ran the rope out to near the crest of Summit Ridge. The corner was very smooth with only one foothold in the 15 metres apart from the turf, but yet the feet seemed to grip quite well, at least when seconding. So what looked exceptionally hard turned out to be VI,6, although pretty bold for the grade. Steve called the route Blood Hound; he likes climbing without gloves and the resultant knuckle would have made the job easy for a searching hound.

We finished up short walls and corners left of the crest of Summit Buttress but only to be different, and soon reached the summit cairn for a late lunch sitting in the sun. It was a gorgeous day and so nice to be able to walk out without hat and gloves. And Sandy was in good time for his talk.”