Posted on December 23, 2016 by Simon Richardson 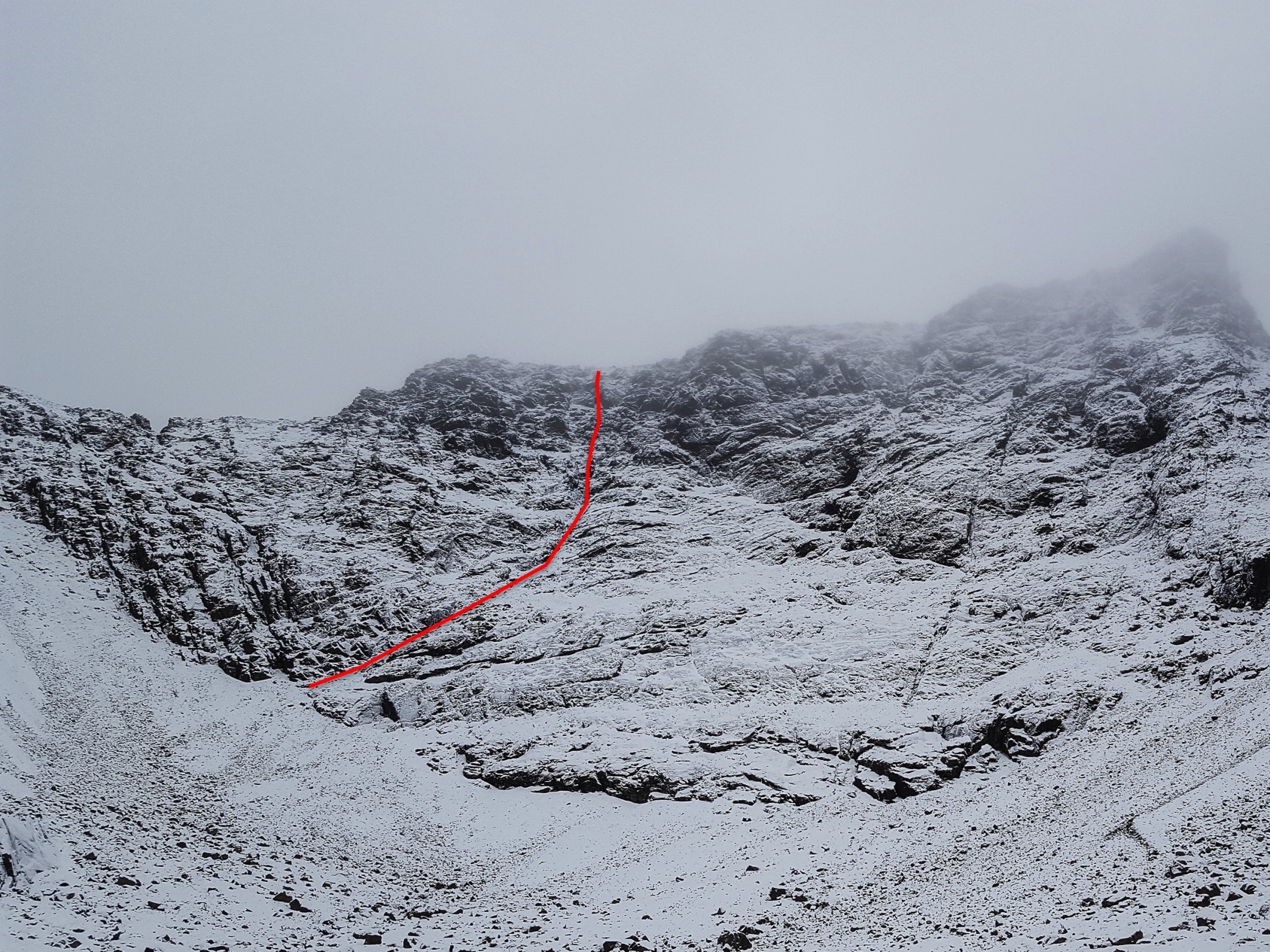 The line of Silver Fox (V,5) on the South Face of Sgurr Mhiccoinnich on Skye. This sustained five-pitch route follows a basalt dyke for most of its length. (Photo/Topo: Mike Lates)

On November 19, Mike Lates and Sophie Grace Chappell made an excellent early season addition to Coire Lagan in the Cuillin with the first ascent of the 235m-long Silver Fox (V,5). “The long curving fault line from the corrie floor to the crest of Sgurr Mhiccoinnich has been on my radar for many years,” Mike explained. “It was a victory of venue theory put into practice. Cold and a good forecast equals definitely something to climb in the Cuillin. Very much along the lines of what I’ve read of your new book, but somewhat stuck in my own wonderful groove!”

“It’s four or five pitches of superb climbing. The basalt is not always very helpful, and there was a whole lot of powder but there wasn’t a whole lot of ice. You repeatedly find yourself with your back or your right shoulder wedged into a bottomless left-facing corner, often undercut and overhanging, with plenty of right-hand hooks and placements in the depths of the corner (but careful – it’s loose in there), and bugger-all out on the sleek basalt powder-covered slabs to your left, which are only too solid. Footwork needs to be good, and tends to involve a single teetering crampon-point striking sparks out of some tiny rounded nubbin. As Mike said, it’s all about opposing forces. Bridging is your friend here. Foot-jams, knee-jams, elbow-jams, thigh-jams, pack-jams and full-body-jams were also deployed. So quite thought-provoking at times, and generally speaking much harder than it looks until the much more user-friendly gabbro kicks in on the final pitch, which is the steepest and most fearsome-looking bit of the whole route, and nowhere near the hardest bit.

The route provided a brilliant day’s climbing. Mike led it like a boss, and I got up it with the odd wobble and squeak, but without actually falling off anything. Standing on belay in the sunshine at 2500ft in knee-deep snow, looking out over Coire Lagain to Loch Brittle, over Canna and Rum and Muck, to Pabbay and Mingulay and the infinite ocean beyond is not something I will forget in a hurry. Mike’s seen these conditions hundreds of times before, of course, but this was my first winter day ever on Skye. We were talking animals – he told me how when he did the winter Cuillin traverse he was following a fox’s footprints all the way from Bruach na Frithe to Gars Bheinn.

There was only ever one possible name for the route. After plenty brainstorming from us both during the day – slightly held back for most of it by the fact that until well after sunset we didn’t know for sure we were going to finish it – Mike finally nailed the name at the top of the walk-off… It is of course The Silver Fox (V,5).”