Posted on December 6, 2016 by Simon Richardson 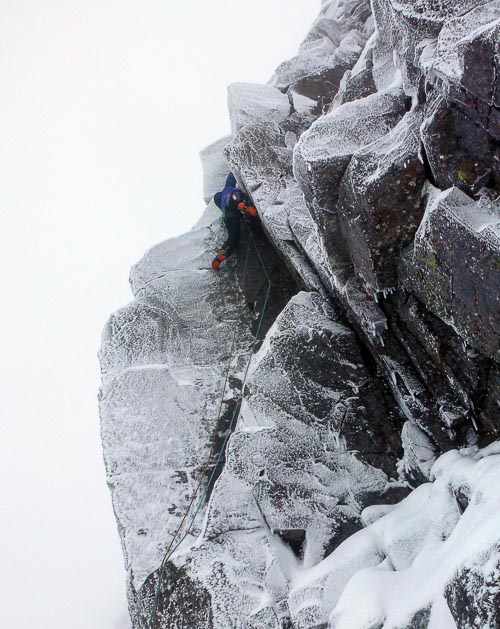 Steve Perry on the crux section of Theory of Relativity (VII,9) during the first ascent. This fierce technical problem is one of two new routes added to Lurcher’s Crag in the Northern Cairngorms this season. (Photo Andy Nisbet)

“Last February I’d been soloing some new routes on the southern end of Lurcher’s Crag with Andy Nisbet,” Steve Perry writes, “when we came across a very steep looking corner-cum-groove line that Andy thought looked about Tech 9 (he’s usually right). On a day of soloing Grade III’s we certainly weren’t psyched for jumping on anything so hard, but we kept it in mind, although good late season ice stopped us from returning.

After a few early season warm up routes in the Northern Corries, we agreed to go and take another look at this corner along with Jonathan Preston (November 7). Conditions on the descent from the top of Lurcher’s Gully looked promising in the thick mist, and contouring in under the crag confirmed our hopes – the corner was in! I had made the most noise about the line, so found myself on the sharp end with Jonathan on belay and Andy taking photos.

The crux was definitely going to be an overhanging groove around 10m up, so I was quite surprised to find myself hanging backwards off my axes on the very start whilst trying to gain the ramp, though good placements in the corner crack and an half decent peg saw me on to it. This was even steeper than it looked! The ramp went fine and I was soon pulling onto a stance beneath the crux, where standing up was quite precarious. The pick-friendly corner crack on the ramp was shallow and unhelpful, so I pushed an axe up with my fingertips and hoped it would sink – no such luck. I did however find a bomber nut at head height, which threw out any excuses not to try. Both sides of the groove where smooth, but a crack high on the right wall saw the axe pick disappear and it was time to take a look.

I pulled up on the one axe with both arms, locked off and reached higher up that right wall with the other axe and found another great placement. My left front point now found a tiny edge and by bridging out, so did my right. The next axe placement was the left and blind but felt ok. I now hurried to get my left foot high on an obvious rail and take some weight off which I managed with a body swing, but even then no weight really came off. A last ditch effort saw me pull completely over the overhanging section into what was now only slightly overhanging and the nut now well below. A few frantic seconds of digging for higher axe placements never worked, though I found a great hex placement which I could only stare at as the forearm fuse finally burned out – I could do nothing but let go… boom… the nut held!

On the next attempt I went straight for the good hex and then dug out the higher placements – they were there after all. I now moved up to a plinth belay and climbed onto it like mounting a horse – the gracious art of winter climbing!

Andy, and then Jonathan joined me at the belay where we let Jonathan climb through onto the final cracked headwall, which had some great hooks and a tricky final move. The rest was easy ground. Grading wasn’t easy for a short route but the illusion of steepness suggested the name Theory of Relativity (VII,9).

November 23 saw us hiking back into Lurcher’s and trying a new line to the right which Jonathan had spotted. This time we were joined by my girlfriend Sarah Sigley. The conditions on descent seemed worse than before but we found this new groove line was quite deep and hidden from the sun. Andy took up the lead and immediately found himself in the middle of a steep boulder problem start, whilst at the same time trying to place a peg one handed – he managed. Scabby turf in the back had frozen well and helped him reach deep cracks up left where he gained ground ahead of some tricky moves as the groove snaked back right. The rope continued to pay out and then he was out of sight.

We heard the shout for safe and I went first, then Sarah. The groove opened out to Andy’s belay and above was a short wall with a hard looking hanging groove or a huge block chimney to the left. We decided on the chimney. Tricky moves and good gear helped me get stood on the huge block, where across the gap, deep hooks led to a difficult short wall mantel. The route now moved rightwards up easier ground to a short corner, which could be climbed direct or via a thin arête comprising upright blocks. I went for the arête and after passing over the top of the corner, found myself at the same belay as the top of Theory of Relativity. Safe!

The bottom pitch was quite sustained so we decided on the name Wolfpack (VI,7). The name derived from the fact that this was the last new line left on Lurcher’s (if you believe that) and thus became quite anticipated, with five people hoping to get on it the week before! Unfortunately everyone was turned back by strong winds that day.”