Posted on November 10, 2016 by Simon Richardson 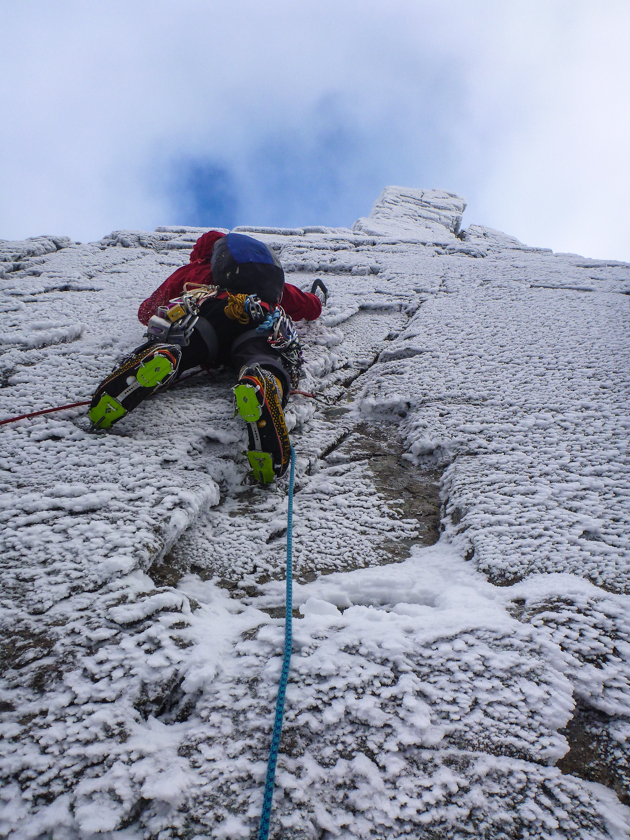 Dave Almond leading the delicate second pitch of Sake (VIII,9) on Ben Nevis during the second ascent. This difficult three-pitch route to the right of Babylon on Number Three Gully Buttress was first climbed by Simon Frost and Takaaki Nagato from Japan during the 2012 BMC Winter Meet. (Photo Helen Rennard)

Winter has arrived on the Scottish mountains. Andy Nisbet and Steve Perry were first off the mark on Friday November 4 with an ascent of the classic Fingers Ridge in Coire an t-Sneachda. They were fortunate that it started to snow in earnest as they began the route and they reported good mixed climbing conditions with the turf frozen from previous days of cold weather.

During the weekend significant snow fell over the Cairngorms and several parties battled up early season favourites of Savage Slit and The Message. Less snow fell on the west and Stuart Macfarlane and Andy Clark made a good route choice with an ascent of Noe Buttress (IV,4) on Ben Cruachan that had been well frozen by the strong northerly winds.

On Monday November 7, the weather improved and Dave Almond and Helen Rennard were one of several teams to take advantage of the early winter blast. “Winter made an early appearance this year so I blasted up from Liverpool and took the opportunity to grab the second ascent of Sake (VIII,9) on Ben Nevis with Helen Rennard,” Dave explained. “The route was originally climbed in January 2012 on the BMC meet by my good friend Simon Frost and his Japanese guest Takaaki. I am surprised it hadn’t had a second ascent before, but maybe that’s because it’s hidden away around the Babylon corner amongst a glut of other top-end quality routes. The climb definitely merits the grade and offers three pitches of distinctly different climbing making it an excellent day out.”

Sake takes the impressive line left of Winter Chimney finishing up the impressive hanging groove to the right of the final chimney of Babylon. Like many routes high on Number Three Gully Buttress it is exposed to northerly winds and comes quickly into condition.