Posted on September 5, 2016 by Simon Richardson 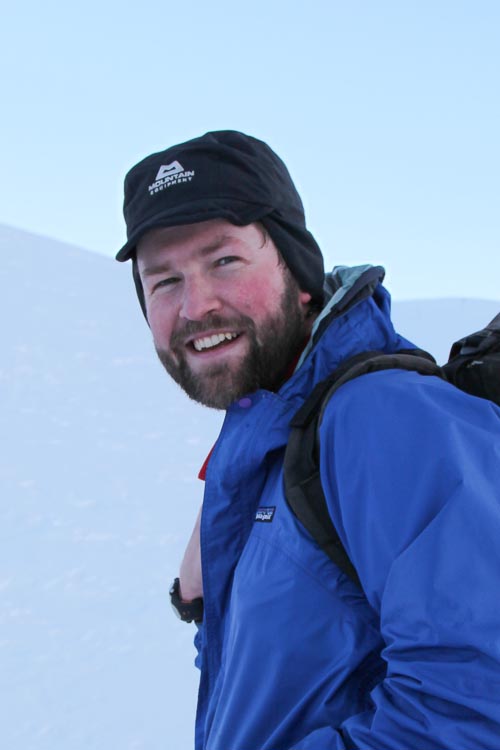 Scottish climbing lost another much-loved figure in August after James Edwards slipped and fell in the Fisherfield mountains. James was setting up a radio relay station for the Wilderness Challenge on behalf of the Dundonnell Mountain Rescue Team, who then had the unenviable task of rescuing one of their own. The rescue was conducted successfully, but tragically James died a few days later in hospital.

James studied Environmental Geology at Sheffield University and soon discovered he was a natural at winter climbing. Although he later climbed many testing routes such as The Citadel (VII,8) on the Shelter Stone and The Rhyme of the Ancient Mariner (VII,7) on Ben Nevis, from the very beginning James was looking beyond the classics. His first significant new routes took place with Gareth Hughes in January 2003 in Coire an Laoigh in the Grey Corries where he found Choc-a-Block (VI,6) and The Epithany (V,6). A week later, he was back with fellow Sheffield University climber James Thacker to add The Alternate (IV,5) and Chaf Direct (IV,6).

The following season, James really got into his stride with first ascents of Turf War (V,6) on the Douglas Boulder and the difficult Under The Weather (VII,7) on the West Top of Bidean, both with Gareth Hughes. By this point, James was taking Scottish winter climbing seriously, and the previous summer he made a reconnaissance visit to Coire nam Fhamhair on Beinn Bhan. The intention was to scope out the wall right of Die Riesenwand for a possible repeat of The Godfather, but James noticed a couple of lines left of Genesis on the left side of the crag. He returned at the end of December with Sam Barron and climbed Revelations (VI,6), a superb natural line of weakness near the left end of the cliff. Three weeks later he was back with Hughes to add Biblical Knowledge (VI,5), which takes the left edge of the fault-line taken by Genesis. These ascents were noteworthy and turned heads. This was well before the mixed climbing leashless revolution and few people dared to conceive new lines on one of the most impressive and feared walls in the Highlands.

James was also a strong alpinist, and early in his climbing career he climbed a number of grandes courses including an icy ascent of the Walker Spur. James drew heavily on his alpine and Scottish expertise when he spent a year in New Zealand on a teaching exchange and immediately set his sights on exploring new ground. During the winter of 2004 he climbed a new route on the 800m west face of Mt. Huxley (2505m) with Sam Barron, spending a night in a snow hole near the summit. James also teamed up with Steven Fortune and Paul Warnock for an 1100m route on the south-east face of Mt. McKerrow (2650m) – Fortune Favours the Bold (TD). His most impressive first ascent took place on Mount Aspiring (3033m), the “Matterhorn” of New Zealand, in January 2005. After an attempt the previous spring, James climbed 24 Hour Party People (ED2), a direct line on the South Face with Kevin Neal and Ollie Metherell involving thin icy mixed up to Scottish VII and bold climbing on ‘weetabix rock’. These climbs were remarkable achievements for a visiting climber and represent the most important alpine ascents by a British mountaineer in the Southern Alps in modern times.

The first time James and I climbed together was in the Southern Sector on Lochagar in November 2006. We clicked immediately and had a brilliant day climbing three new routes including Ghost Dance (V,6) and Starlight and Storm (V,5). James was eager to climb the cruxes of both routes and he pulled through steep bulges and danced up steep walls with confidence and grace. We finished off with a Grade II gully, and intriguingly this was the route that James raved about most afterwards. James was training to be a guide at the time and he explained it would be an absolutely perfect route to introduce new climbers to the sport.

This commitment to help other people summed up James. He became an inspirational schoolteacher, always full of enthusiasm and looking for ways to enhance the experience of his pupils. It was a cruel irony that James should die whilst on rescue team work. James left us far too young when he still had so much more to give. Tanya his wife, and their two sons Finlay and Reuben, have much to be proud of, and the world is truly a lesser place for the passing of James Edwards.

Simon Richardson is a passionate Scottish winter climber
View all posts by Simon Richardson →
This entry was posted in Commentary and tagged James Edwards. Bookmark the permalink.