Book Review – A Passion for Climbing

Posted on September 1, 2016 by Simon Richardson 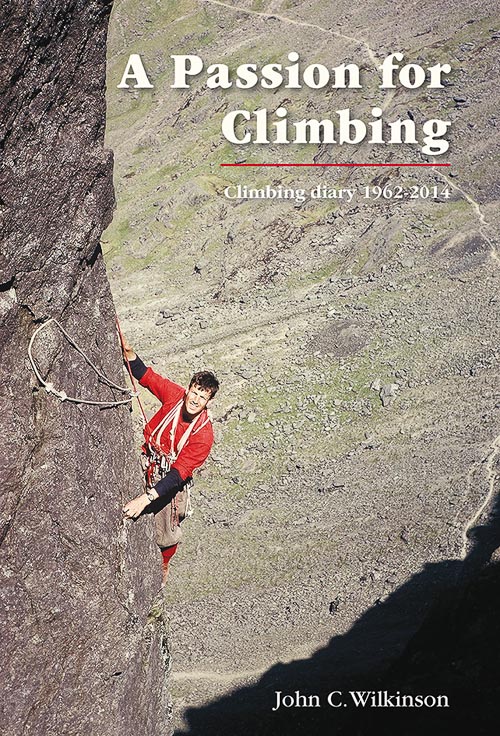 My great friend John Wilkinson has kept a diary throughout his climbing life. Last year, after encouragement from several of his climbing partners, he published it as A Passion for Climbing. John came into climbing at the relatively advanced age of 28 and the book describes over 50 years of adventures from 1962 to 2014.

A Passion for Climbing is well titled, as this is a book about a lifelong love affair with rock climbing and mountaineering. John has climbed extensively across the UK, but he is probably best known for his Alpine record, which numbers well over two hundred ascents. Although John never climbed the very hardest routes, he succeeded on an extraordinary number of major climbs, and mountain guides apart, John is almost certainly the most prolific British alpinist of his generation. Looking at John’s copy of Rebuffat’s 100 Best is an eye-opener as nearly three-quarters of the routes are ticked!

This book is a pure celebration of the climbing game. The exuberance and excitement of John’s early climbs in the Alps and North Wales during the 1960s shines through, as does the urgency and raw nerve required to climb many of the hardest routes of the day with rudimentary equipment. John forged a strong partnership with Ron James, and together they climbed many challenging routes such as the Buhlweg on Roda di Vael in the Dolomites, as well as the first ascent of the three star Girdle of Lower Amphitheatre Wall (E1) on Craig yr Isfa. Scottish winter climbing is represented by a productive visit to Ben Nevis and a brief account of the first ascent of Roaring Forties (IV,4) on Aonach Mor. This was climbed on a typically windy day and was named by John to fit in with the storm-bound nomenclature of the early climbs.

As Senior Member of the Oxford University Mountaineering Club (John was a Fellow at St Hughes College) John formed a number of productive partnerships with younger climbers in the second half of his climbing career. The teams were well balanced – John‘s experience and knowledge would often provide the know-how of when, where and what to do in return for not being at the sharp end of the rope. This took him to Yosemite, Colorado, Squamish and Morocco as well as expeditions to the Kishtwar Himalaya and the Cordillera Blanca. The sheer number of high standard routes is impressive. For any climber in their fifties thinking of toning down their climbing, they should think again. Ascents of the Gervasutti Pillar and the West Face of the Petites Jorasses (descending into Italy) are big routes in anyone’s book, but an afternoon ascent of the 25-pitch long French Route on the Crozzon di Brenta is simply awe inspiring!

Passion for Climbing has been published privately. The 236 page book is illustrated with more than 75 colour photos. A copy can be obtained for the cost of postage and packing (£6.00) – please email Tom Prentice <Tpoutdoor@aol.com> for details.

Simon Richardson is a passionate Scottish winter climber
View all posts by Simon Richardson →
This entry was posted in Book Reviews and tagged John Wilkinson. Bookmark the permalink.