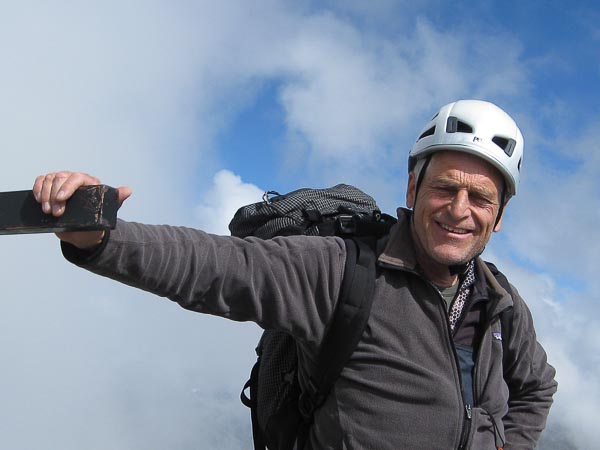 Des Rubens on the summit of the Stockhorn (3212m) in the Bernese Oberland. Des was a highly accomplished mountaineer with many first ascents in Scotland as well as the Himalayas and North and South America (Photo Geoff Cohen)

In late June, the Scottish climbing community were shocked to hear of the death of Des Rubens in the Alps. Des was one of the most energetic and likeable activists on the Scottish scene and many climbers were deeply saddened by his passing.

When I first came to live in Scotland in the mid 1980s there were several climbing partnerships such as Nisbet and MacLean and Milne and Anderson doing great things in the Scottish mountains. But one highly effective team that immediately caught my eye was the Edinburgh-based group of Des Rubens, Geoff Cohen, Gordon Macnair and Dave Broadhead. Rather than extending the technical envelope they were pushing boundaries in other ways – exploring the North-West and climbing a significant routes. In those days there were no up to date climbing guidebooks to the Northern Highlands, which was very much unknown terrain. Weekend after weekend, Des added new routes such or made important repeats such as the second ascent of Der Riesenwand (VII,6) on Beinn Bhan (with Geoff Cohen) and the first ascents of Potala Buttress (IV,5) on An Teallach, Toll Dubh Chimney (V,5) on Liathach and The Boundary (IV,5) on Sgurr Mor in the Fannaichs (all with Dave Broadhead).

Des’s appetite for exploratory mountaineering was a continuing theme throughout his life. He first visited Afghanistan with Ian Rowe when he was 20 years old, and three years later he led the Edinburgh University Mountaineering Club expedition to the Thui group in the Hindi Raj in Pakistan where they made four first ascents. Overall, Des went on over a dozen major expeditions, from India to the Karakorum, and from Peru to the Canadian Coast Range. In 1984 he made a highly successful visit to the Caucasus with Dave Broadhead climbing several summits including the highly-prized Ushba (4690m), and the following year he reached 7770m on the unclimbed South-West Ridge of Gasherbrum III (7952m) with Geoff Cohen – a bold attempt on a difficult mountain that has only been climbed twice.

Des was also an enthusiastic alpinist with major routes such as the Walker Spur to his credit, but arguably his most inspiring climb was the long and serious Peuterey Ridge on Mont Blanc which he climbed with Geoff Cohen in 2013 when they both had a combined age of 127. From 2008 to 2010 he was a popular and influential President of the Scottish Mountaineering Club.

Des had a highly successful family and professional life. After training as a physics teacher, he moved into outdoor education and introduced thousands of children to the outdoors. He promoted a strong ‘can do’ attitude and instilled confidence in many young people as they were about to set out on their adult lives.

For all his mountaineering and professional success, it is Des the person that will be most remembered. He had a warm and amiable personality and always had time for everybody else. He took more pleasure from what others were doing rather than his own achievements, and he always made whoever he was speaking to feel special. His memorial service was attended by over 400 people – a fitting tribute to a great man who had influenced and touched so many different people’s lives.

Simon Richardson is a passionate Scottish winter climber
View all posts by Simon Richardson →
This entry was posted in Commentary and tagged Des Rubens. Bookmark the permalink.