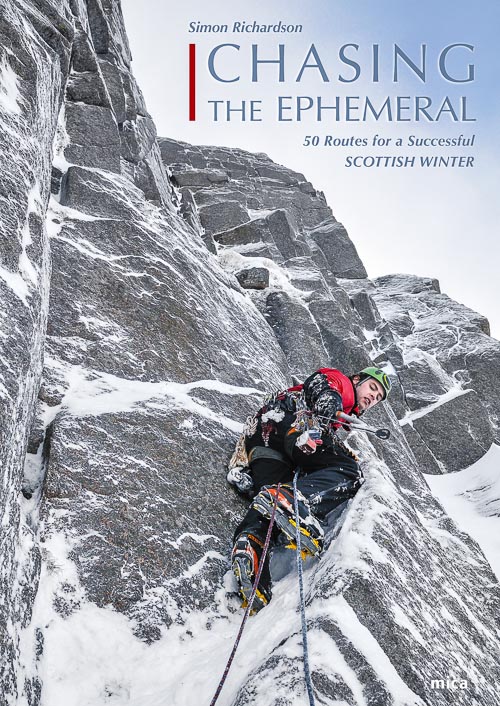 Chasing The Ephemeral – 50 Routes for a Successful Scottish Winter will be published by Mica Publishing in November. The cover photo shows Robbie Miller on the second pitch of the Cumming-Crofton Route (VI,6) on Beinn a’Bhuird. (Photo Henning Wackerhage)

As soon as the second edition of Ben Nevis – Britain’s Highest Mountain (which I co-authored with Ken Crocket) was published in 2009, Tom Prentice asked me whether I would like to write a book about Scottish winter climbing. The original idea was to produce a selected guidebook describing 50 of the finest routes, but the more we discussed it, the concept gradually began to change. The problem with describing the absolute best Scottish winter routes is that they require good conditions and many become climbable all at the same time. For me, being in the right place at the right time has always been the underlying Scottish winter climbing skill, so the selection criteria for the book evolved into a series of routes that cover the full range of climbing opportunities throughout the season – from snowed up rock routes in the first snows of November through to high up ice routes in April.

After three years of discussion with Tom, I finally put pen to paper in 2012. It immediately became clear that this was a book about winter climbing strategy and tactics. I set about describing how to choose the most appropriate route to suit the prevailing weather and conditions (strategy) and then how to approach, climb and decend safely and efficiently (tactics). These strategy and tactics have been derived from long personal experience. Like many folk I have juggled climbing with a full time job and family, and have not had the flexibility to go climbing exactly when I pleased. In fact for nearly 20 years, my climbing was constrained to Sundays, but by careful choice of routes and venues I was able to successfully winter climb nine Sundays out of ten. I have described these thought processes in the book and then illustrated them with a selection of outstanding winter routes that I have enjoyed. Many will be well-known favourites, but others will be less familiar. My intention is not to create a tick list, but to prompt Scottish winter climbers to think widely about where to go and what to do.

Chasing the Ephemeral – 50 Routes for a Successful Scottish Winter will be a sumptuously illustrated book with routes from III to VII covering all major winter climbing areas in Scotland. Many people have kindly helped review the text and provided images, and I will be contacting a few more folk for some final photos in the coming weeks as we move to the final stages of production and publication date of November 2016.

5 Responses to Chasing The Ephemeral