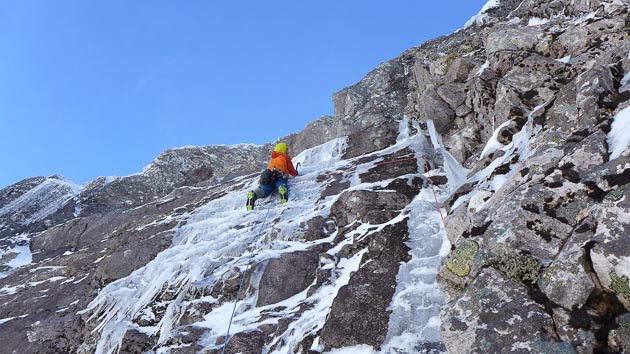 Carn Dearg Buttress on Ben Nevis became particularly icy at the end of February and the classic Gemini (VI,6) saw many ascents together with the very good, but less frequented Waterfall Gully Direct Finish (VI,6). On March 10, just before the cold spell ended, Nick Bullock and Tim Neill nipped in for an excellent new addition on the Gemini headwall.

“The line takes an often-prominent ice smear that often forms to the left of the twin grooves and Direct finish to Gemini,” Tim told me.” It appears to lead to nowhere, or at the very least, to an area of compact rock.

From the good belay just left of the foot of Gemini’s twin grooves, the route pulls over the overlap on the left leading to a good pillar of ice in a left-facing groove. This leads to a stance on a small ledge to its right on a shoulder after 30m or so.

Nick then climbed the icy groove above until it was possible to pull out left onto the surprisingly steep smear. This was followed to a more helpful and better-protected groove exiting right onto a snowy ledge. There was a possible bomber belay here, but instead, Nick continued up the technical and well-protected shallow groove above, to reach easy ground below the crest of Ledge Route.

The route is provisionally called Capricorn (Nick’s star sign and holding the same traits required for a successful lead… ) It felt VIII,7 on the day, but it could may well feel a touch easier with slightly better ice. Nick led all the hard ground in one monster pitch.”