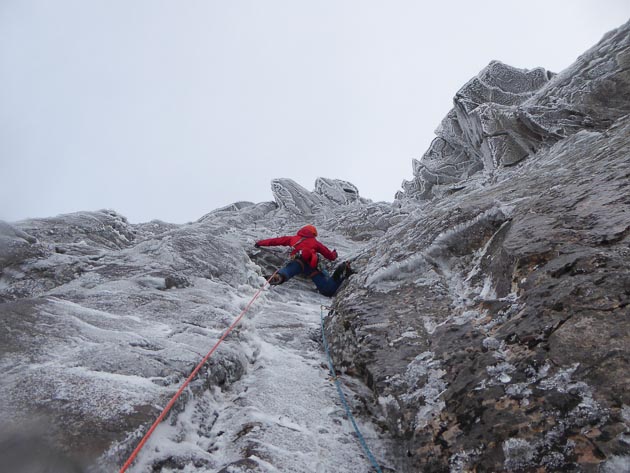 Uisdean Hawthorn on the third pitch of Immortal Memory (IX,9) during the second ascent. This demanding winter-only line on the Far East Wall of Beinn Eighe was first climbed by Guy Robertson and Jason Currie in January 2013. (Photo Murdoch Jamieson)

It’s been something of a landmark year on Beinn Eighe with repeats of many hard routes, and on March 3,  Murdoch Jamieson, Ian Parnell and Uisdean Hawthorn continued the trend with the second ascent of Immortal Memory (IX,9).

“ We had a social walk in with Dave Macleod and Steve Perry so the walking was easy,” Murdoch explained. “Descending the gully and turning left, we all became very excited.  The Far East Wall was looking very wintry in terms of Far East Wall standards.  (With it being so steep, I guess it’s hard for it to get in such good condition).  All of a sudden there was too much choice!  I left the decision up to Ian and Uisdean. They settled for Immortal memory [whilst Dave and Steve went for Sundance].

Ian nominated himself to start us off.  Uisdean sent me up the second pitch.  It’s pretty physical and pumpy.  Not much feet along with being very steep.  Things were nicely gazed in verglas so I was made to work harder for my protection – a relentless pitch.  Uisdean took on pitch 3, which again is superb.  It never gave up till he rocked over the top of the crag… no nice easier ground at the top to relax like the other routes I’ve been on.

We went back a few days later, the crag was blacker than black!”