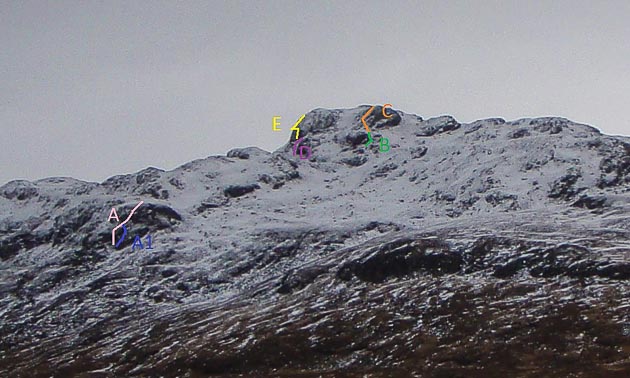 “On March 6 Andy Clark, Rob Wright and I needed a short day with options to cut off early, so we headed for Masa and Yuki Sakano’s routes on the North-West Ridge of Binnein Shuas,” Martin Holland writes.

“We climbed an alternative start to Location, Location, Location; the cave mentioned in Masa’s description is actually a through route. Andy, Rob and I climbed this and it gave a hilarious squeeze/thrutch with rucksacks needing to be removed part way up. Like all squeezes it’s difficult to grade, but the final moves out of the cave felt hard, but with good protection, so we’re suggesting a grade of III,5 and a name of The Cave Man Start.

Higher up we climbed Bogle Eyed, which again gave a good quality, ice pitch and must form quite readily. We then aimed for what I thought was Summit North-West Buttress. We climbed what looked like the “obvious zig-zag snow line”, however, it felt somewhat nippy for a II and we popped out about 20m North of the summit rather than ‘80m West’; so not the same line, but a good pitch direct to the summit.

With the benefit of better visibility on Saturday and topping out I now know I incorrectly located Bogle Eyed relative to Laggan Fantasy when I reported it last year on scottishwinter.com. Bogle Eyed is actually roughly level with and about 100m left (East) of Laggan Fantasy.

The line we climbed on Sunday to near the summit is on what I’d guess would have to be called the Summit North or just the Summit Buttress. The Off Yer Knees name is Andy and Rob’s suggestion as it was a regular cry from Andy to Rob on the day!”