Posted on February 4, 2015 by Simon Richardson 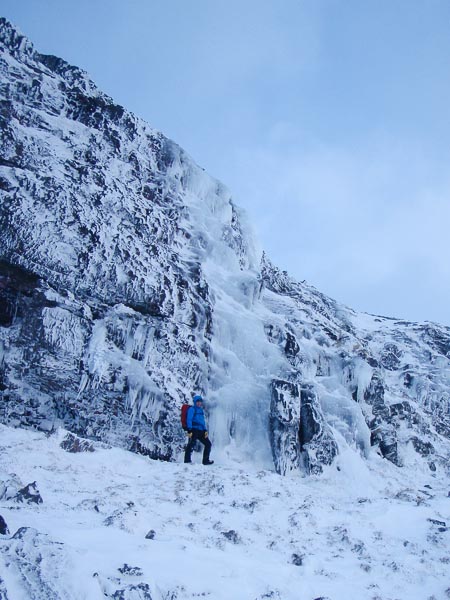 Martin Holland standing beneath the line of Bogle Eyed (III) on Binnein Shuas. This can be climbed as an alternative to Laggan Fantasy on the three-sectioned North-West Integrale. (Photo Jim Bayliss)

On Saturday January 31, Martin Holland and Jim Bayliss were looking for a climb to suit the forecast of strong Northerly winds with fairly continuous snow and not too far from Aviemore, where they were staying.

“I remembered a report on scottishwinter.com from last year of some new routes by Masa and Yuki Sakano on the North-West ridge of Binnein Shuas and we thought they might fit the bill for the day,” Martin told me. “It’s not a long walk in, but breaking trail, sometimes in thigh deep snow, took a while.

We climbed Location, Location, Location, which I’m guessing may be the second ascent. We split the route in to two pitches, which seemed the obvious thing to do as there’s an initial steeper section with a good block belay above, followed by a short walk to a more slabby delicate section.

We then walked up the ill-defined ridge aiming for Laggan Fantasy” However, on crossing the wide easy angled gully forming the obvious step in the ridge we spotted a short, but well formed, ice line down and right of Laggan Fantasy. It started from the lowest section of steep crag containing Laggan Fantasy and gave 20m of excellent water ice climbing followed by 10m of easy ground to a good belay at blocks.

We called the route Bogle Eyed and graded it III. It’s a short route, but in keeping with the routes of Masa and Yuki, and was a good choice for the conditions.”