Posted on February 3, 2015 by Simon Richardson 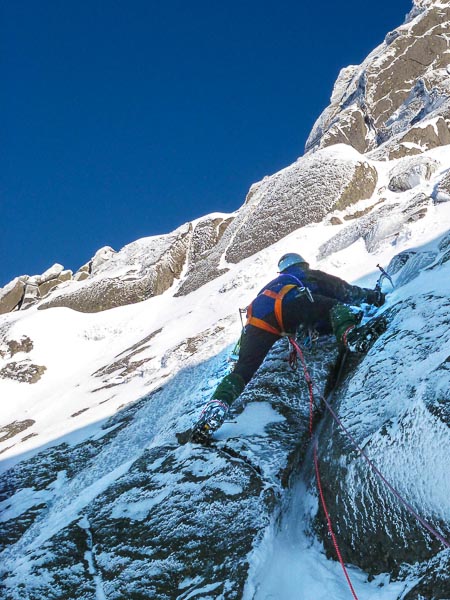 Brian Davison on the technical crux of 101 Dalmatians (VII,7) where precarious moves above the crack lead to an easing in the angle. [And yes, this is a current photo and not a throwback to the 1970s – Brain Davison does still wear a Whillans Harness!] (Photo Andy Nisbet)

“After the routes done around New Year,” Andy Nisbet writes, “I began to realise Lurcher’s Crag wasn’t worked out after all, particularly when conditions became increasingly icy as the cold spell began to bite. I didn’t have much respect for the depressions between the ridges, largely because they had hard slabby starts and much easy ground higher up, but with a need for somewhere local and deep snow around, Sandy Allan and I thought we’d try one which didn’t look too hard. So on January 8 we waded down South Gully and along the terrace to the groove between Reindeer Ridge and St. Bernard’s Ridge. It turned out not to be too difficult and gave what turned out to be the common pattern for these grooves, two harder pitches, then easy ground to a final headwall. I wasn’t sure about political names but given the date, it was hard not to call it Je Suis Charlie (Grade III).

After a following couple of weeks of stormy and snowy westerlies, many cliffs were swamped in soft snow and with Brian Davison up for a long weekend and insisting on all three days climbing, the venue had to be west facing and accessible to my weak legs. The next groove to the right seemed like a good option but this time we descended Central Gully (the top is easy) to reach it. Brian was well ahead of Sandy and me as usual and not having seen much of him since the car park, didn’t really know where we were going. He did stop below the first groove south of Central Gully and asked if this was it, because it looked good. I had it in my head that it was very smooth but when I caught up, it looked quite reasonable and much icier than I’d seen before. We weren’t expecting the ice so had blunt gear with us; a good excuse for pointing Brian at it. It was still quite thin and with not much protection but the usual two tricky pitches led to an easier finish. Topical names seemed to be theme so Beagle has Landed even added the doggy part and became the name (Grade V,4), although Sandy thought Grade IV was high enough.

The next day we made a fruitless trip to Beinn Bhan in deep snow and bad spindrift so the following day need to be a short(ish) walk-in again. So it was back to Lurcher’s to the groove, which was the intention for the day before. This of course turned out to be the one with the smooth start but again it was iced, albeit steeper and thinner than the Beagle Has Landed. The ice didn’t reach the base but a steep crack in a smooth V-groove almost reached it. The crack was clearly going to be hard and looked like it might end in snow which might cover either smooth rock (to the pessimist) or continue to the ice. Brian was happy to give it a go and take what came, which turned out to be increasingly precarious moves as the angle eased. The next pitch appeared to be well iced but the ice was very thin and there was a difficult bulge again with a strenuous move with gear leading to a precarious one above it. After that was a heavily snowed slab with a decreasing thickness of ice interspersed with increasing blobs of turf. A lot of digging and faith was required but Brian came up with both, so the three of us reached easy ground. This time there was a chimney in a headwall and being forced to lead something, I did some dithering before commitment solved it quickly. The world news that day was dull so it was back to dog names. I called it 101 Dalmations, which the others reluctantly accepted, and we graded it (VII,7).

As a postscript, the final two depressions have also been climbed recently. I climbed the one between Dog Day Afternoon and Summit Ridge on a wild day when stopping to belay would have been purgatory (Wallydraigle, III). And on January 27, Sandy and I climbed the depression between Ptarmigan Ridge and Sweep, finishing up its headwall to join Ptarmigan Ridge – conditions were slushy at best.”