Posted on February 2, 2015 by Simon Richardson 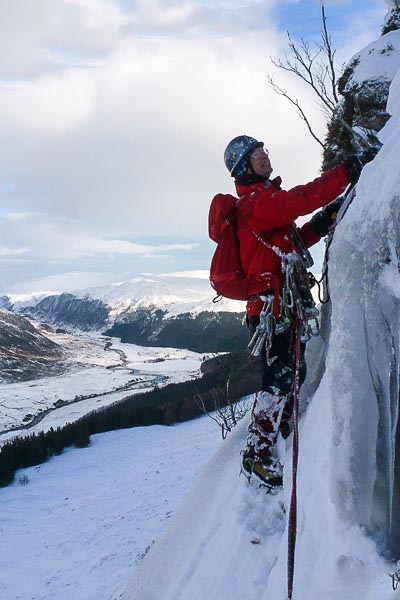 Dave Broadhead on the first ascent of Gift Horse (IV,5) on Meall Bhuidhe in Strathconon. Loch Beannacharain is just off picture to the left and Strathconon is in the background. (Photo John Mackenzie)

“Dave Broadhead and I managed to wade up, and wade out, of an icefall up near the head of Strathconon, above Loch Beannacharain,” John Mackenzie writes.”It’s a place that probably no-ones heard of apart from James Edwards who ‘gifted’ me this route after having to retreat from it a few years back.

There is a massive depth of snow on north and north-east faces and this icefall naturally lies on the north side of a most modest hill called Meall Buidhe. It had a rather convoluted approach from Inverchoran and after another outing with Andrew James to another icefall that turned out to be a waterfall on January 19 (insulated by snow higher up) I noted that James’ line was in fact frozen.

Dave was curious so on January 22 we snow-ploughed up to the base of the thing where all of a sudden it became a lot bigger than it looked from below. Two vertical screens of ice and a final icefall up a wide runnel all looked very promising and all went well until the big screen was reached which turned out to be a hanging fragile carapace. Fortunately just to its right steep ice led to what seemed like easy ground on this third pitch but in fact this is where the difficulties began. Snow covered rock slabs which were smooth had to be crossed to a corner where a poor icicle runner then led to improving gear (a tied-off peg that could be placed and removed by hand) and a good, fortunately, belay a little higher. An ungradable pitch!

Dave then had the ‘cream’ where the upper icefall gave a lovely pitch of 35m, quite steep and with a window on the upper bulge where you could see torrents of water running behind. Unfortunately all this joy exited onto a depth of snow, saved by a tiny sapling but worse followed.

The only way off was up to the crest of the ridge and the only way up was to spread weight by lying, kneeling or burrowing. We all know that climbing is supposed to be playtime but with the wind getting up and the afternoon progressing and progress tardy, the play aspect was a little stretched. We eventually made the crest and followed it eastwards and down to the glen above Inverchoran. Small hills can bite sometimes!”