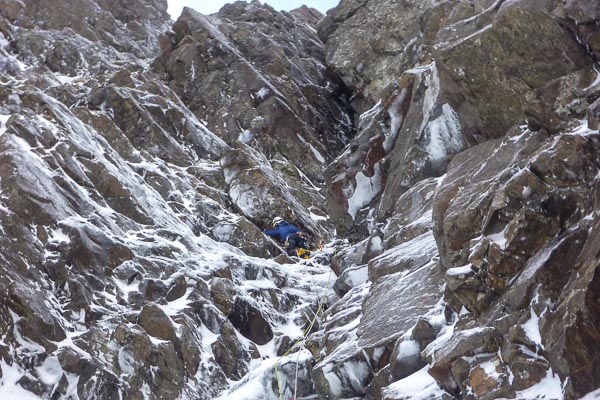 Steve Perry leading the first pitch of Hidden Gully (V,6) on the West Face of Sgurr a’ Ghreadaidh on Skye. The steep chimney section comprising the second pitch can be seen looming above. (Photo Michael Barnard)

Steve Perry and Michael Barnard added an excellent new winter route to Skye on January 17. Unfortunately Steve’s email sat in my spam folder for a couple of weeks, so better late than never, here is Steve’s story:

“Having spent the whole afternoon sifting through guidebooks and trying to find a crag suitable for the current conditions, I received a call from Michael Barnard who suggested going to Skye that very evening. Why hadn’t I thought of that? A quick call to the Skye guru Mike Lates for a conditions update saw us driving west soon after and arriving at Carbost just after midnight.

I had no plan whatsoever for Skye, but Michael did – Hidden Gully – a route first soloed in June 1908 by an F.Greig on the West Face of Sgurr a’ Ghreadaidh and graded Diff.

The West Face was easily recognisable on the approach that next morning through Coire a’ Ghreadaidh by the very distinct ice line of White Wedding, with our line being somewhere just right of it. On the final traverse into the crag Hidden Gully finally revealed itself. Michael’s first thoughts were that the route looked more like a chimney than a gully, and mine were that it appeared steep for a Diff, but most essentially it looked a very attractive line so it was game on.

Nice steady climbing leading up to the chimney uncovered great conditions, and soon we were both into the deep jaws of it. Verglas harder than tank armour covered both sides but a vertical line of well-spaced chock-stones afforded good, but quite bold protection. Michael liked the look of all this and off he went. The climbing was a strenuous pleasure, back-and-footing then precariously balance on a chockstone and repeat, onwards and upwards. Slowly standing up onto the final chockstone I emerged from the walls to fantastic exposure and to seeing both ropes disappear through a very small hole. Like some Arctic pot holer I crawled through and found Michael in the brand new world that was the top half of our route.

The gully ended here but an obvious line of weakness now gave still high quality climbing, technical and sustained, culminating in exposed traverse moves to a groove and above us the last pitch – a fine interesting V-groove leading up finally onto easier ground.

After some debate the grade was settled at V,6. The two things that we did totally agree on however were that the route warranted three stars and that F.Greig was certainly going well in 1908!”

Simon Richardson is a passionate Scottish winter climber
View all posts by Simon Richardson →
This entry was posted in New Routes and tagged Michael Barnard, Sgurr a' Ghreadaidh, Steve Perry, The Cuillin. Bookmark the permalink.

1 Response to Hidden Gully on Skye