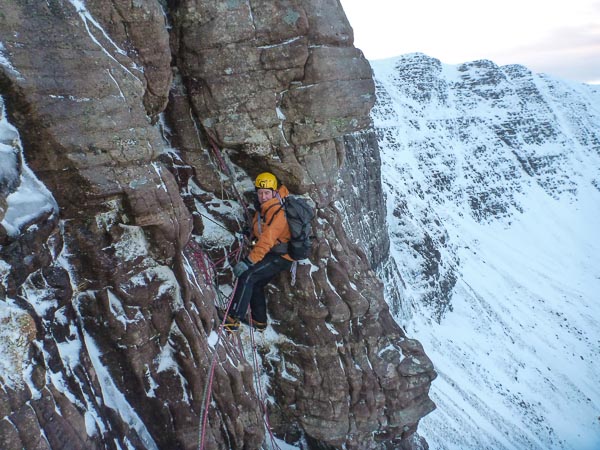 Neil Wilson on the first ascent of Sideshow (IV,6) on Cul Mor. The route lies on the left side of the secluded Coire Gorm where the cliff is cut by a number of chimneys and fault lines. (Photo James Edwards)

“Neil Wilson and I went in to Cul Mor to poke about after seeing the icy pictures of The Greatest Show On Earth,” James told me. “The temperature was a bit warmer than advertised, so we switched plans to mixed routes and instead found fantastic conditions for mixed climbing.

Last time Neil was there (in 2002) he made the first ascent of the route Three Chimneys with Roger Web. I’d teamed up with Roger for the route Four Eagles on my last visit (2006), so we started up to the right of both those routes and climbed a superb 180m-long chimney-fault line at around IV,6. It had a couple of quite pokey moves that required a little thought, but with gear at either eye level or overhead when the difficulties arose what was there not to like?

The views from the crag were as stunning as always, and the experience of climbing in that corrie truly is one of the Greatest Shows on Earth!”