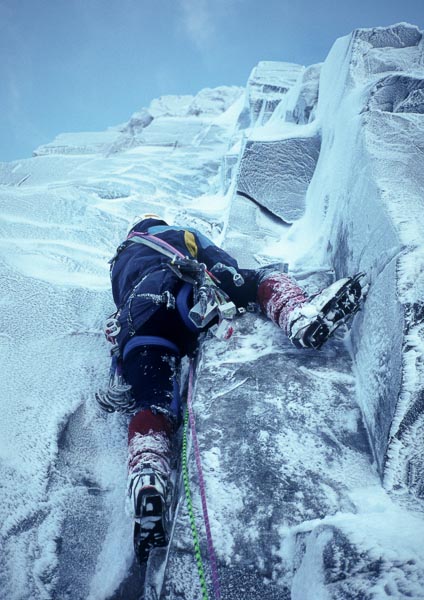 Chris Cartwright climbing the prominent V-groove of Enigma (VII,7) during the first winter ascent in January 1997. The route was first climbed in summer 1952 by Marshall, Cole and Oliver and was repeated in winter by Malcolm Bass and Andy Brown in January 2008. (Archive Photo Simon Richardson)

Erik Baillot and Dave Kerr made the third winter ascent of Enigma (VII,7) on Fuar Tholl’s Mainreachan Buttress on January 24.

“We had a great day climbing on this magnificent crag,” Erik told me. “It was the second time this winter, as we climbed Mainline Connection in mid-December (which deserves three stars). We went for Enigma because we thought it would be well sheltered from the worse of the wind. It probably was but it was still a wild day and we got pummelled by fierce wind.

The route was great and we think that it deserves three stars. We climbed it in five pitches and the climbing was always interested due to iced up cracks and verglas.

Pitch 3 was the crux. I climbed an iced crack to a narrow left ramp (30cm) with only one hard-won runner before exiting on the ledge with no turf pro left (used in the iced up crack well below). We felt this warranted VII,7 (of the soft kind) but still serious.

The highlights of the route were the groove seen on the picture on SMC guide [and above] and the lone bonsai Scot pine tree growing at the end of pitch 8! That’s the only photo we took, as the weather was so wild that the camera never came out.”