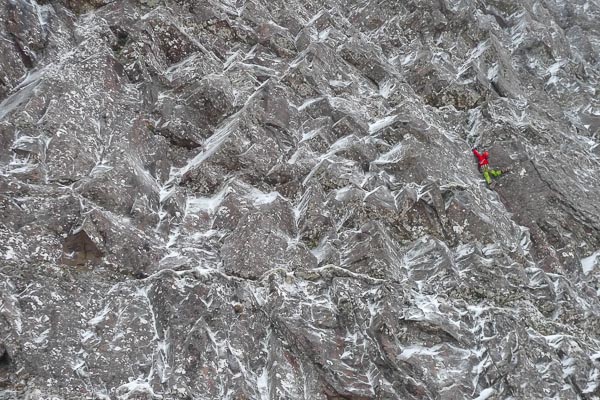 Andy Inglis on the first pitch of Godzilla (IX,8) on Beinn Bhan during the second ascent. This route was first climbed by Guy Robertson, Pete Benson and Nick Bullock in March 2011 and was one of the first few Grade IX’s in Scotland to receive an on sight first ascent. (Photo Iain Small)

On January 24, Iain Small, Andy Inglis and Murdoch Jamieson made the second ascent of Godzilla (IX,8) in Coire nan Fhamair on Beinn Bhan. This exceptionally steep expedition is a direct version of The Godfather, taking an intricate line through the lower wall, before climbing two pitches of The Godfather corner to finish.

“I managed to hook up with Andy and Murdoch and we eventually settled on walking into Beinn Bhan to take a look,” Iain told me. “We packed some screws to keep our options open but hoped the quick thaw on the Friday hadn’t made much impact and that the freezing level would be low enough and the crag sheltered.

After a rather snowy and exciting drive we walked into increasingly grim weather with heavy graupel squalls blinding us and wavering our thoughts. As conditions underfoot began to firm up we could spot the crag through the poor dawn light and things looked wintry. We grabbed the chance to gear up in a brief lull and avoided too much misery. The previous evening’s route of choice was now a bit too real, but we silently climbed the remaining slopes to below the monumental wall and by some consensus Andy tied in and started the journey.

Six pitches later we topped out in the dark and wind, the thaw hadn’t caught up yet and we were all tired, relieved and even happy. There really is nothing so essentially ‘winter only’ as an outing on those looming prehistoric cliffs!”