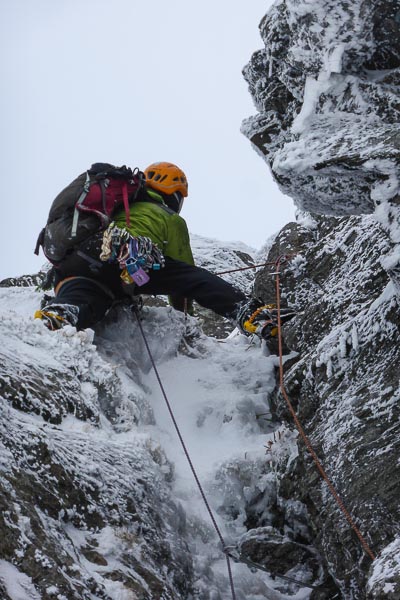 Matt Buchanan making the first winter ascent of Arch Chimney (V,5) on Creag Tharsuinn in Arrochar. This was one of the last ‘old school’ summer routes on the cliff to receive a winter ascent. (Photo Dafyyd Morris)

Dafydd Morris and Matt Buchanan laid an old ghost to rest with the first winter ascent of Arch Chimney on the Upper Buttress of Creag Tharsuinn on January 22.

“Matt and I headed back to Creag Tharsuinn to give Arch Chimney a go, once again!” Dafydd explained. “I say again, because when we did the winter ascent of Hangover in the corrie two years ago we had a look at it, but on that occasion it was a hoared up rocky chimney/corner line. We went back later that season to try it only to spend four hours taking the gear for a walk in waist deep snow. Zero visibility meant we wandered aimlessly round the cliffs trying to get our bearings without success so beat a not so hasty retreat to the Village Inn in Arrochar for consolation pints!

This time, the deep snow was still there, and to our horror so was the low cloud cover. After another wander round, thinking bloody hell not again, the cloud lifted and presented the crag to us, and right enough, we were miles away from our objective. A wade later to the bottom of the route revealed an icy slabby corner. Luckily we’d left all the ice gear behind as we’re really good at reading conditions!

So I managed to get a great peg in at the bottom of the pitch, and that was it gear-wise pretty much. The ice was too thin for screws anyway. Back and footing up the corner it was a bit awkward swinging the axes in the confined space but this led to a great belay below the Arch pitch which Matt dispatched pretty sharpish. The route was 65 to 70 metres all together and followed the summer line. We had the usual debate about the grade. I thought V,4 whilst Matt gave it V,5. I guess it would really depend on the ice build up on the first pitch. A great day out whatever – you gotta love the Southern Highlands. This time the pint in the Village Inn tasted a bit sweeter!”