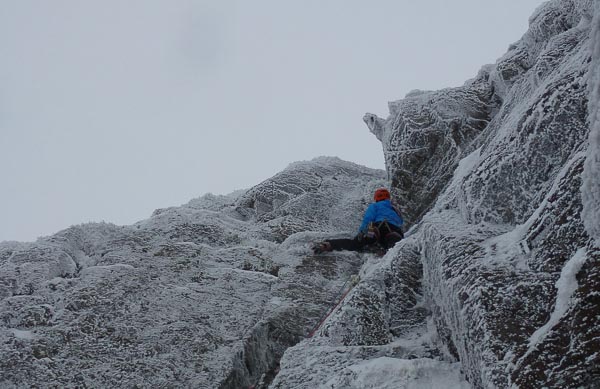 Dafydd Morris contemplating the top wall/corner past the rock finger on the second pitch of Hangover (VI,6) on Creag Tharsuinn in Arrochar. (Photo Matt Buchanan)

“Headed out last Sunday (January 20) to Creag Tharsuinn in Arrochar with Matt Buchanan,” Dafydd Morris reports. “A great wee venue. Had a winter ascent of Hangover in mind, a summer Severe on the upper buttress. I’d been up to the crag a few weeks before and this caught my eye, a much better looking winter line than a summer one in my opinion, damp and turfy looking.

The crag was in top nick, hoared up with bomber turf. I’d envisaged the top pitch would be the crux but it turned out to be the first 15m or so, a pretty tenuous pull over a bulge, not much gear and little for the axes made for an interesting few moves, this led into a great turfy steep corner to a relaxing belay ledge. We then headed up a rocky corner to a steep wall passing a finger of rock described in the guide. Great climbing, really enjoyed it. Grade wise, VI,6. Overall a top day, not a breath of wind, and plenty of time for a couple of pints of Jock Frost in the Village Inn down in Arrochar.

On Thursday (January 24) we tackled The Sting on Beinn Dorain, with Matt again. A fantastic line, the ramp has some superbly delicate moves and the main corner pitch was great fun, steep and well protected. Discussed grades in the pub afterwards with Stuart MacFarlane and Gary Gray who had just done The Prophet. Stu had done the Sting a couple of years previously. General consensus was VI,6 for the ramp and V,7 for the corner, so overall VI,6 or VI,7? Winter grading, love the debates!”