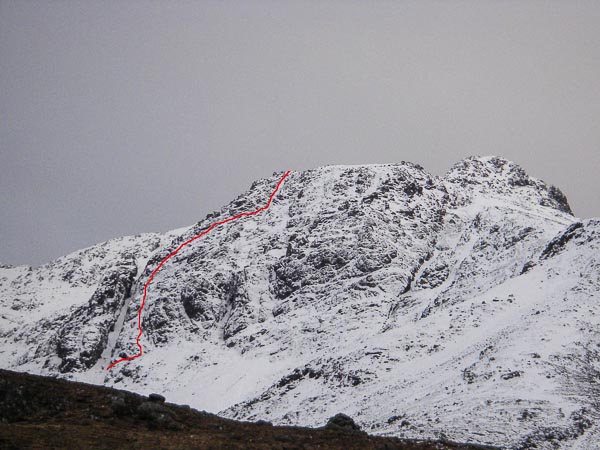 The line of the 380m-long Curtain Call (III) on the West Face of Window Buttress in Coire na Banachdaich on Skye. This cliff is easily approached from the Glen Brittle Hut and has considerable scope for more long winter routes. (Photo Brendan Croft)

Skye guide and guidebook author Mike Lates organised a highly successful winter meet based at the BMC Hut in Glen Brittle from January 18-21. Conditions were close to perfect, and Mike’s highly informative blog covers the activity on the meet.

Highlights included a new ice line on the southern face of Sgurr Dearg’s West Ridge – Away from the Crowd (IV), and a mass ascent of Hubble, Bubble, Toil and Trouble, a 500m-long III,5 on the right edge of Waterpipe Gully. James Sutton and Ben Wear made the first winter ascent of Dyke Gully and Buttress (V,6) on Sgurr a’Mhadaidh’s North Face, and Steve Perry and Antoni Anderson added South End, an attractive looking IV,5 to Caisteal a’Garbh-Choire. On the final day, Mike Lates and partner visited the ‘daunting’ North face of Mhadaidh and made the first winter ascent of Vixen Groove (V,5).

A couple of new routes were added to the West Face of Window Buttress in Coire na Banachdaich, which directly faces the Glen Brittle hut – Perspex Groove (IV,4) by  Andy Moles and Iain Murray and Curtain Call (III) by Brendan Croft and Paul Cunningham.

“There is only one other winter line recorded on the face,” Brendan told me, “which seems incredible given its proximity to the hut. However, snow conditions low down were exceptional at the weekend so maybe we got lucky. Paul and I started at the foot of the descent route and expected to be at the top in around four pitches. However, the route just kept on going and we ended up doing it in eight rope lengths, the majority of which was grade II ground, with one steeper section on pitch three. With a short approach, acres of rock and a simple descent, the West Face seems like an ideal venue for anyone looking for long, easy-angled routes.”