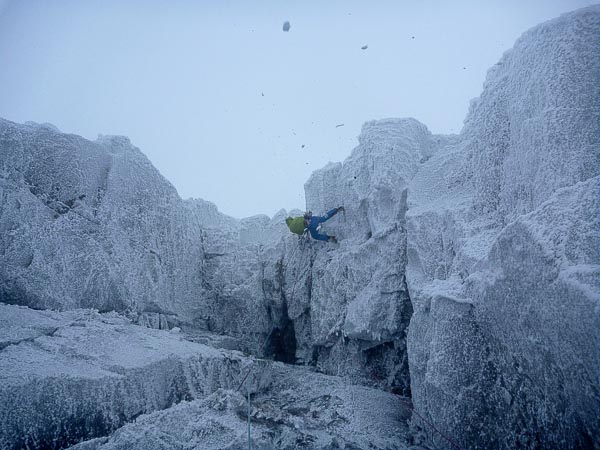 Greg Boswell moving across the 6-metre wide roof of The Cathedral (X,11) on The Cobbler during the third ascent. “I moved quickly between horrible wobbly hooks and torques and swung my feet out horizontally in front of me. I flustered around trying to find another hook where the last had ripped out, but all I could find was a tiny rounded sloping edge…” (Photo Adam Russell)

On Wednesday January 23, Greg Boswell (belayed by Adam Russell) notched up significant repeat when he made the third ascent of The Cathedral (X,11) on The Cobbler. The Cathedral climbs up to a tight niche at the back of the cave on the front face of the Centre Peak, and then climbs across a six metre horizontal roof crack across the middle of the cave to gain turf at the lip and easy ground above. The 30m-long line is not taken by a summer route and is an ideal winter only line as it features wet, dirty rock with lots of turf.

Greg made a ground up ascent, but was thwarted on the on sight when a chockstone ripped as he was most of the way across the roof on his first attempt. After a failed second go, he lowered off, pulled the ropes through and had a rest, before climbing the route cleanly on his next attempt.

“The route was harder than I had expected’” Greg told me. “It was definitely more sustained and physical than both the Hurting and Don’t Die of Ignorance, but better protected. I was surprised to find the route in such good condition, and it was fun to have my first route on the Cobbler be such a good one!”

Ten years ago Dave MacLeod began pushing the Scottish winter envelope with a series of difficult ascents such as his on sight repeat of the Demon Direct in the Northern Corries. During the cold snap near the end of January 2004, Dave pushed the technical limit yet further when he succeeded on The Cathedral, his long-standing roof project on the Cobbler. The Cathedral was the largest continuous roof ever climbed in Scottish winter at the time (now equalled by Dave’s own Castle in the Sky from last season), and was climbed ground up at the second attempt. Dave had tried to on sight the route in January 2003, but had failed due to lack of physical endurance. This time Dave was full of confidence having just returned from a very successful visit to Uschinen in Switzerland where he had climbed several of continental Europe’s hardest mixed routes including the M12 test piece Vertical Limit.

Dave then went on to climb The Hurting (XI,11) in 2005, Don’t Die of Ignorance (XI,11) in 2008 and Anubis (XII) in 2010 to create a remarkable quartet of difficult winter routes that appeared so far ahead of their time that it would take years for them to be repeated. Remarkably, Greg has now climbed three of these routes in the last three seasons, and remains highly enthusiastic about the physically challenging nature of Dave’s routes.

“I was super psyched to get this route ticked,” Greg wrote on his blog. “Once again, Mr MacLeod gives an energy sapping masterpiece of fun and hard climbing… keep them coming Dave!”

Simon Richardson is a passionate Scottish winter climber
View all posts by Simon Richardson →
This entry was posted in Repeats and tagged Adam Russell, Greg Boswell, The Cobbler. Bookmark the permalink.

3 Responses to The Cathedral – Third Ascent